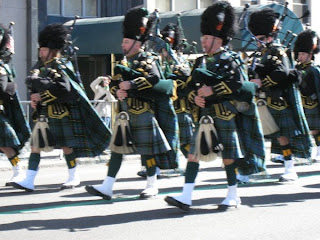 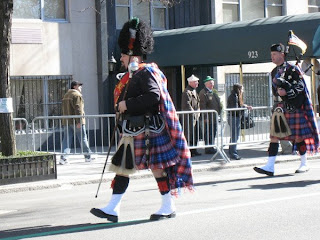 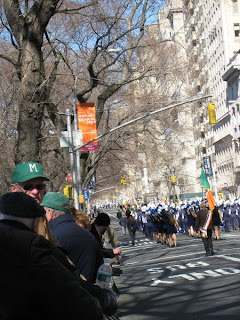 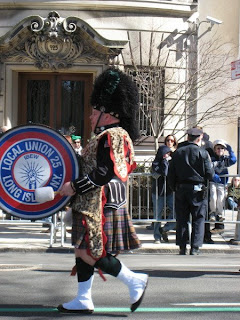 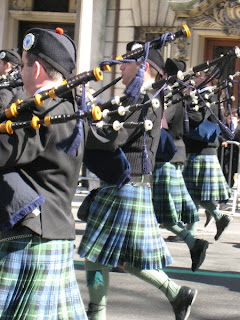 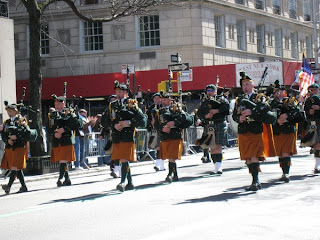 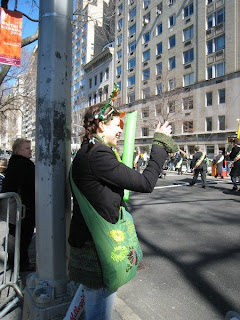 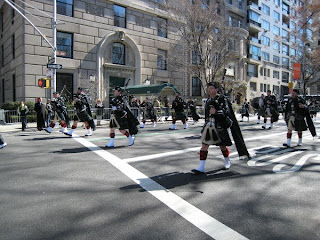 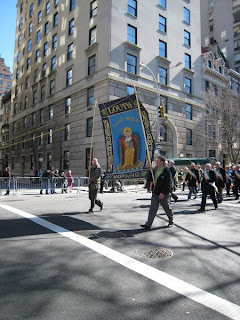 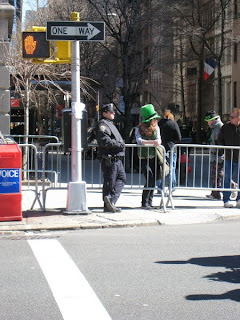 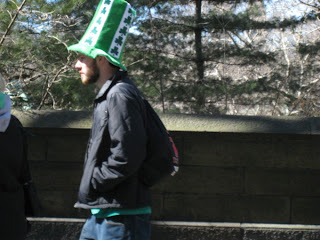 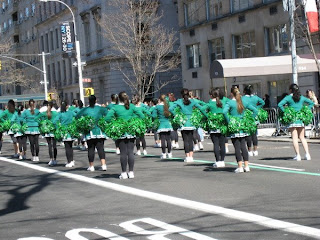 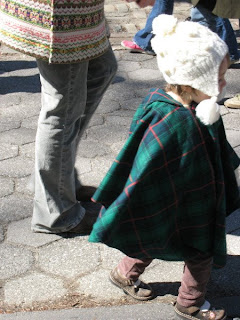 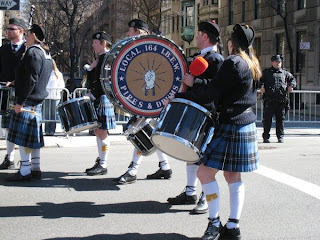 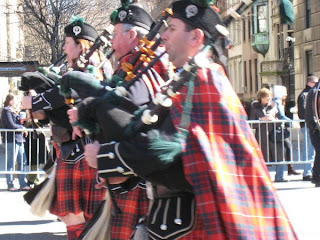 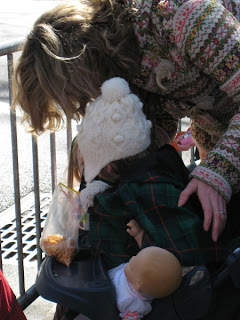 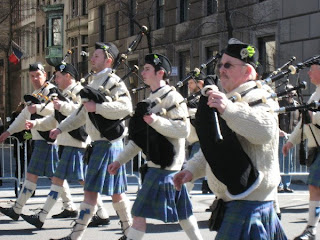 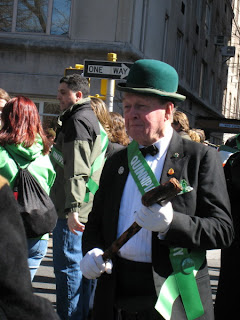 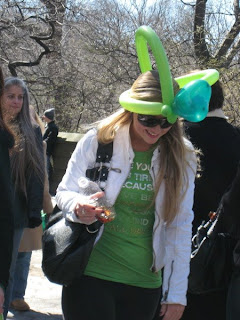 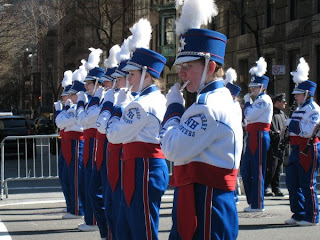 We had a beautiful March 17, with vivid blue sky, temperature enough above freezing to protect the legs of marching drum majorettes and kilted pipers. The steady breeze did present some challenges.

I tried to capture a variety of hats, marchers and viewers, so that you all would be able to share this lovely afternoon with us.
Pleasant dreams.
Posted by Frances at 2:12 PM 23 comments: 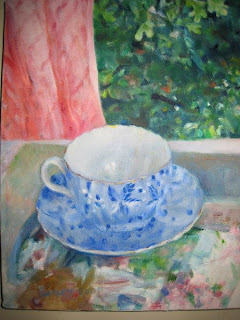 I can remember when I would write a blog almost every day. Then, there were the times when I would write at least once a week.
And then, as can be the case with any sort of diary, the frequency dropped off. My last post was around the time that I actually thought that I would be soon stopping the coughing spells whose freqency was a bit alarming.
Well, the coughing went on. And on. I kept going to work, and on every available day off, used any free time to sleep, thinking that would bring on the cure. It did not.
Friends and work colleagues pestered me to see a doctor. Demands at the shop kept piling up, and my time off became less and less. Some of you may have already detected my over-developed sense of responsibility. It has been on display. It is not a way to stop a cough.
Finally, yesterday, I did arrange an appointment with my doctor. I was delighted to know that he still had kept my file, because I had not seen him in about four years. Really, I just don't get sick. I do see my various other docs, the eye man, the gynocologist, the skin cancer man, the dentist lady, but the general practitioner, or internist as they are called over here, if I have no need I will not make an appointment.
Yesterday afternoon I did promise to make another appointment for a long overdue "regular checkup." The kind and diplomatice doctor said ... my lungs are clear. He thought I might have had some sort of viral infection and gave me a prescription, which I have filled and will use for two more days, before seeing what the results might be. I will call the doctor and report the results. If all is well ... hooray. If not, I may need to have a chest x-ray. Wait ... on Monday, I had my annual mammogram. Is that not enough x-raying for the month of March?

I make a bit light of this, but it is a relief to have seen the doctor, and to have him think that there is not much wrong with me.
Today was a day off that began with ... an 8 am managers meeting. After that get together was adjourned I had the day to myself, and this afternoon actually did a little doodling around with my watercolors, inspired by the very early signs of spring that I have seen in the Park. I will return to the watercolor, which is very abstract, and mostly green and yellow. I have no idea what it may turn out to be. The main thing was that I actually got the paints out for the first time in months. I have to retrain myself!
If all goes well, I will have added to this post a picture of a painting I did many years ago, another of my china tea cups. The photo is bad, but it does give an idea of the painting.
Here in New York, we are still all abuzz about the revelations regarding Mr. Spitzer, who today resigned as Governor of our state. The blocks around the apartment building where he has his private residence (not the governor's mansion which is upstate in Albany) have been totally taken over by television sound trucks. Helicoptors bearing cameras hover above.
Meanwhile this evening brings a little news about the 22 year old young lady who had the encounter with the former governor that seems to have been the encounter (but far from the only such encounter) that doomed his career. It is entirely likely that this young lady had no idea that he was the governor. Her own story is not such a happy one.
In the midst of all of this, the coughing is abating, and spring is slowly headed our way.
Pleasant dreams to all.
Posted by Frances at 5:49 PM 25 comments: