Good afternoon from New York, on a hot Sunday, the final day of May.

This is a time of year when many so-called street fairs come to our neighborhood. Various vendors set up their stands early in the morning, and then hope to attract lots of customers before having to dismantle the stands around 6 pm. The stands are actually in the street, so that normal vehicular traffic is blocked during the fair hours.

As I walked down Broadway, I took a sampling of photos to give you an idea of why folks either love or hate these fairs. You will quickly see that a city street fair is very different from a village craft fair. 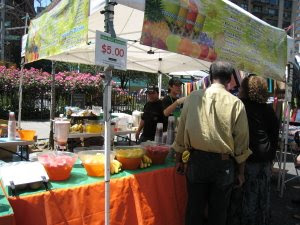 There are many food stands, many of which seem to offer similar menus. Fresh fruit was plentiful, either cubed, pured, dipped in chocolate, or put to other uses. In the background of the above picture you might just see some roses blooming in a tiny triangular park formed where Broadway and Amsterdam Avenue convene. 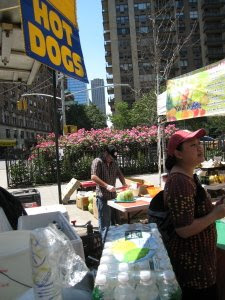 Another view of the roses, and a chance to find hot dogs. 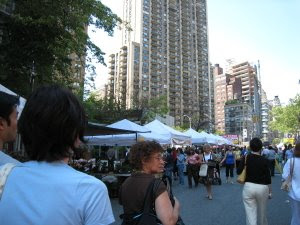 This photo is a longer range view to show that there are many tall buildings along Broadway. Most have stores or cinemas or restaurants at street level and apartments above. 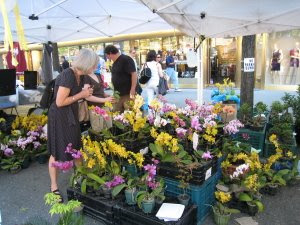 You might be tempted to buy some orchids. I am not at all sure if these orchids will have much of a life span. 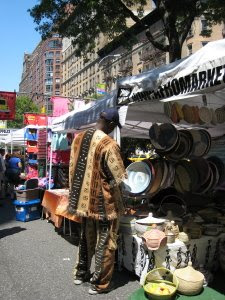 You could buy some baskets woven in Africa. 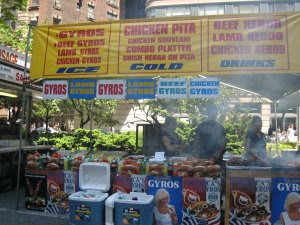 You could try to endure the very fragrant smoke from the grills long enough to buy a gyro or shish kabob. 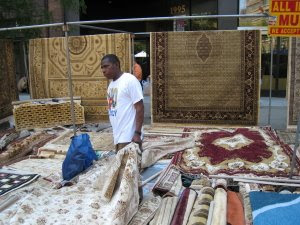 Just across the way, you might consider a carpet, but remember that these carpets are also collecting lots of that fragrant smoke. 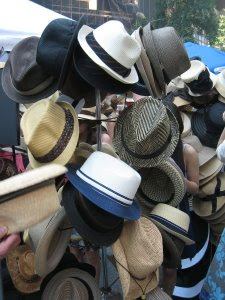 A few blocks down the street, I saw a straw hat stand that was doing very well. 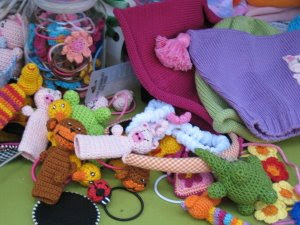 Here's a corner of a stand that mainly featured children's clothing. The little crocheted key chain bobbles and finger puppets were rather charming. 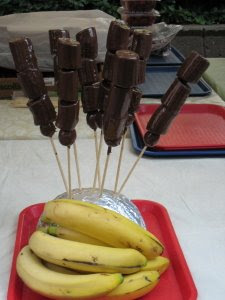 Chocolate coated bananas, sure to be a bit messy when being eaten. 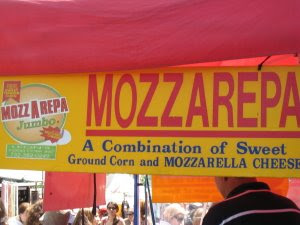 I had not seen this delicacy in prior street fairs, but several stands were offering the mozzarepa this afternoon. I did see a few folks giving them a try. Other folks settled for traditional grilled corn on the cob, with lots of butter. 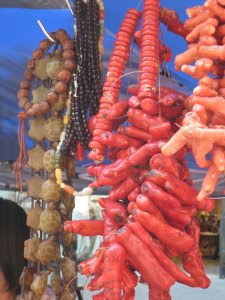 The above picture is a close-up view of a jewelry stand's necklace assortment. 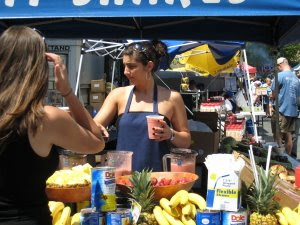 This young lady was doing very well with her blender, pineapples, canned pineapple juice, bananas and strawberries. Her stand was very near the southern end of the blocks given over to the street fair, and just north of our neighborhood's cultural zone, at Lincoln Center.
For the past year, the many buildings and plazas at Lincoln Center have been undergoing much needed renovation work. Alice Tully Hall is just now coming out from under its protective scaffolding, and now has a splendid angular glass front. 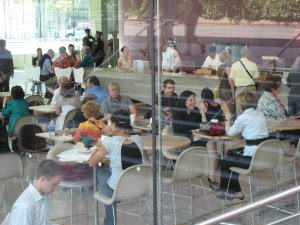 The above picture shows a new cafe that is just inside this glass front. It is a nice place to meet before a performance, or just to sit down for refreshments. Very different atmosphere from that of the street fair. 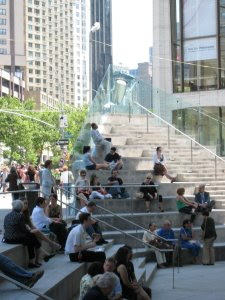 Just outside that glassed-in area is a mini-amphitheatre, which is also angular in shape. There are occasionally performances held in this space. The performers will have to compete with the traffic moving down Broadway a few yards away.
There is always lots of change in this neighborhood, even though many of the older buildings are designated landmarks and, therefore, cannot be torn down. Lesser anointed buildings are always being replaced by new towers that are not always architecturally distinguished. 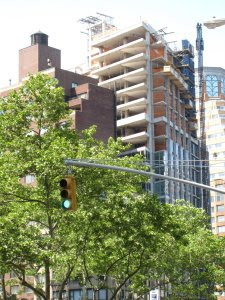 This last picture is taken facing uptown, or northwards on Broadway. The building under construction will be 22 stories tall, and is being build pretty quickly. I keep thinking of all the folks who will be living there, and whether they will want to ride the same subways and buses that I ride.
Hoping that you all have enjoyed this Sunday in the city. You may now be even more happy with your own country views.
Happy June to all.
Posted by Frances at 12:43 PM 28 comments: