It's been quite a while since my last post, and I am delighted to report that the street repairs on my block were finally completed.  It's been a relief to have normal peace and quiet restored. 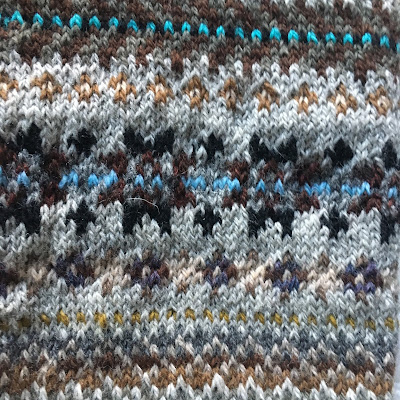 The relative quiet has made it easier for me to concentrate on some fair isle knitting.  Some of you all may have noticed that I have added some tubular cowls and fingerless mitts to my Foakley Arts Etsy.com shop. 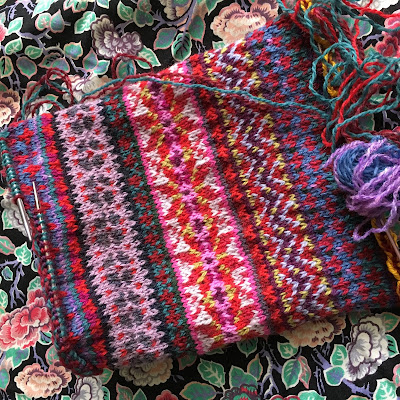 Chillier weather is gradually settling in, and it's been interesting to see changes occurring over in Central Park every time I take a walk there. 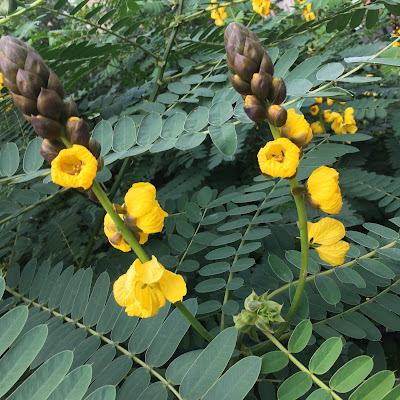 The Park's lawns are still beautifully green, and at last some of the tree leaves are beginning to change their colors. 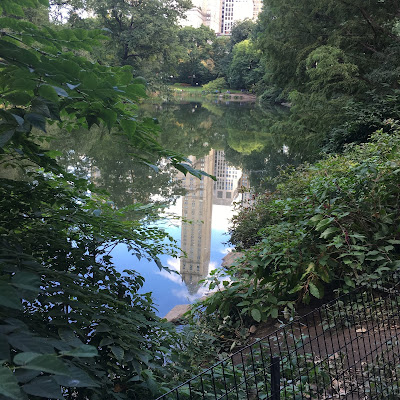 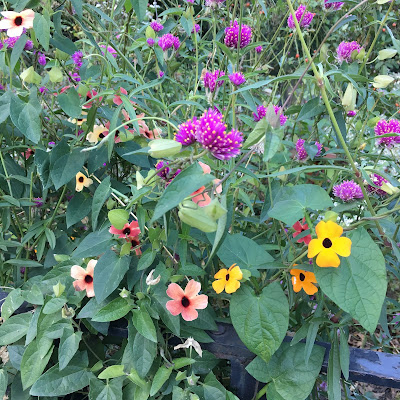 Sitting on a bench with an ice cream cone no longer seems as appealing as popping into a cafe for a coffee or hot chocolate. 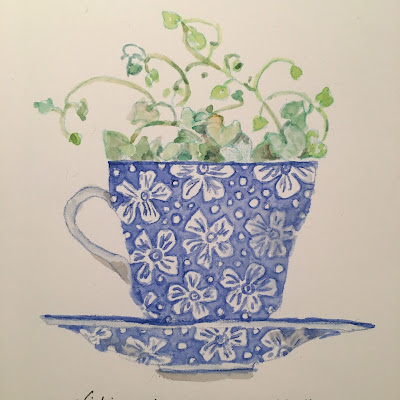 I am still quite devoted to weekly trips to the farmers market, and recently based a little watercolor card, painted for a friend, on a string of hearts plant purchased at the Union Square Farmers Market. 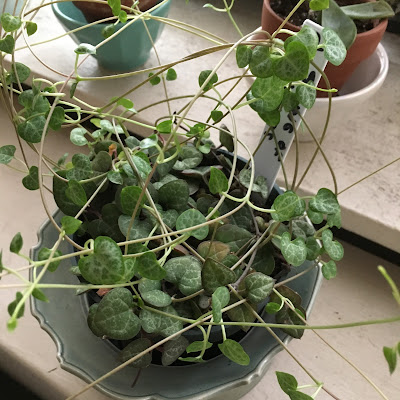 Here is photo of some of the mitts I recently completed. 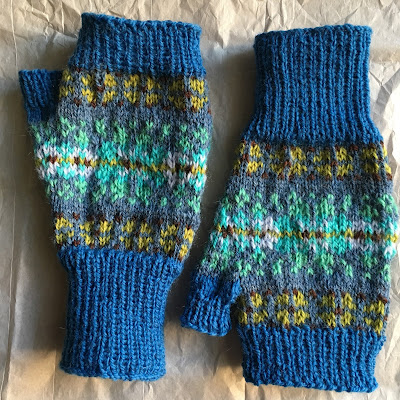 Pumpkins of all shapes, sizes and colors are appearing around town. Lots of orange on display. 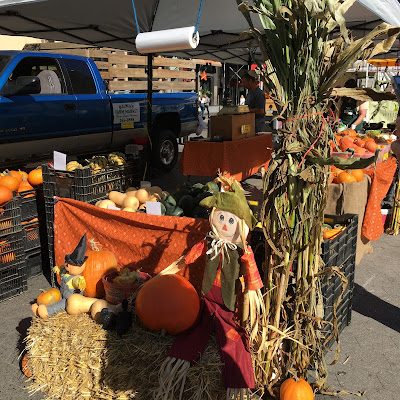 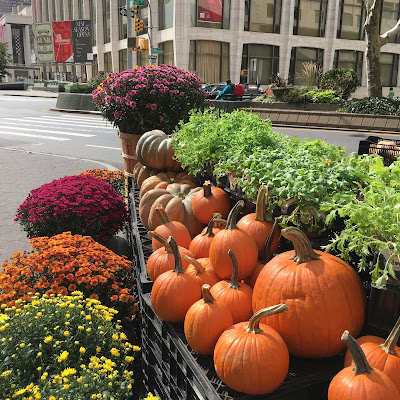 Here is yet another sample of my recent knitting.  Knitting has proved a good method for staying calm while still staying up to date with increasingly worrying current events. 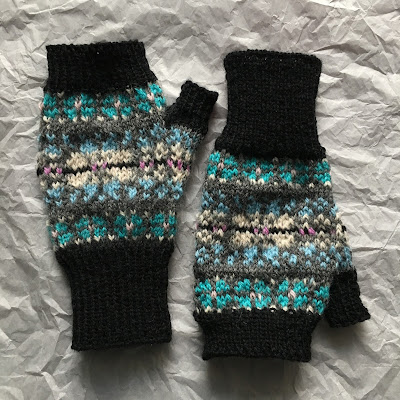 Some houses in my neighborhood have begun decorating for Halloween. 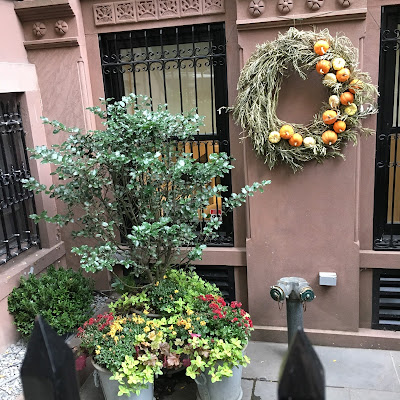 Yesterday was a very overcast day, which seemed to cause certain colors to became accented.  I decided to take a walk over to the Park to check on how the changing leaf colors were coming along. 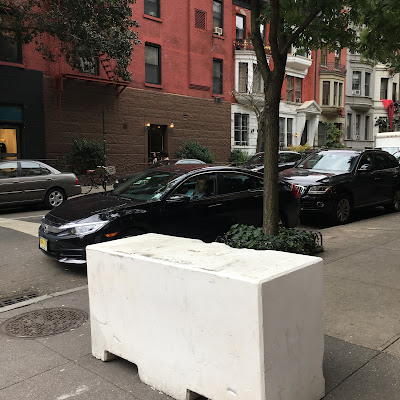 At several intersections I was puzzled to see these large, heavy barricades on the sidewalk corners. 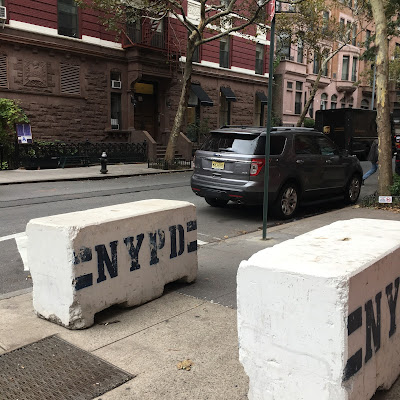 They did not seem to be arranged in the same way on each of the corners, and I wondered why they had been placed there.  Typically, around New York, similar barricades that might be deployed as a way to impede motor vehicles heading on to sidewalks (either accidentally or intentionally in our new normal) are somehow decorated to be a bit easier on the eyes.  That usual barricade placement is also different from what I saw yesterday. 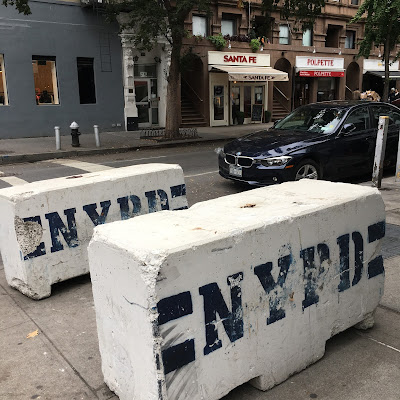 As I continued my walk, I began to notice a series of colored signs posted at intervals along the sidewalk.  Aha!  That told me that some film crews were at work somewhere nearby.  I thought that part of their schedule might involve temporarily stopping regular traffic on some streets, so that the film crews could put down tracks for the cameras to roll on.  Those barricades might be put to work. 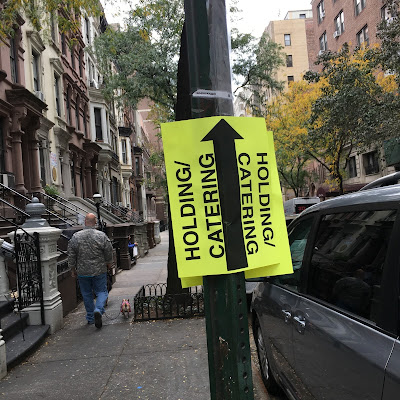 I continued to walk, and entered the Park, discovering that additional film crews seemed to be using several Park locations. 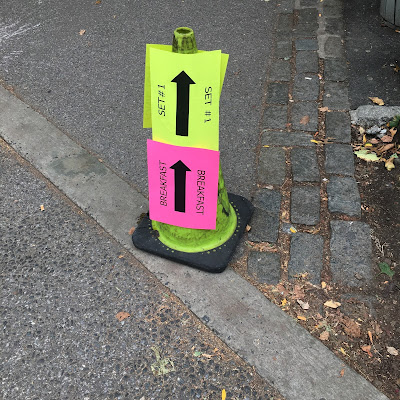 Perhaps because of the dark sky, and chilly, damp air, the Strawberry Fields mosaic had not drawn its usual crowds, so I stopped to take a photo.  I don't remember ever before taking a photo in this area. 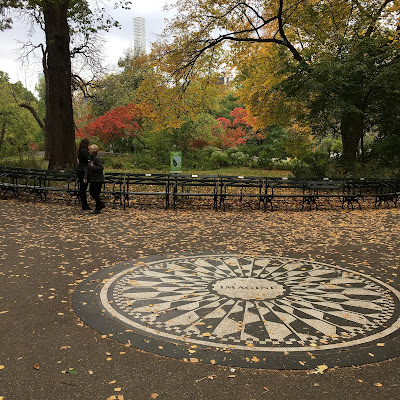 My curiosity lead me over to the old Band Shell area, where the trees were glowing, and lots of equipment was in use, and also standing by for future use. 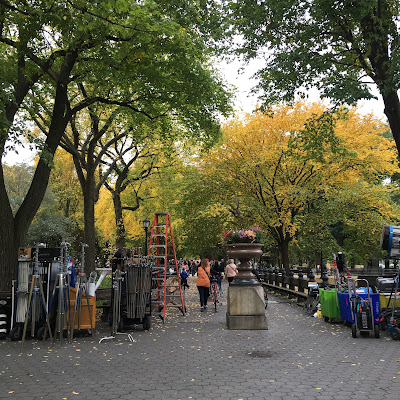 One of my friends has been involved in filming a major movie recently, making use of some locations near where I live.  I am always hoping to come upon one of these shoots. 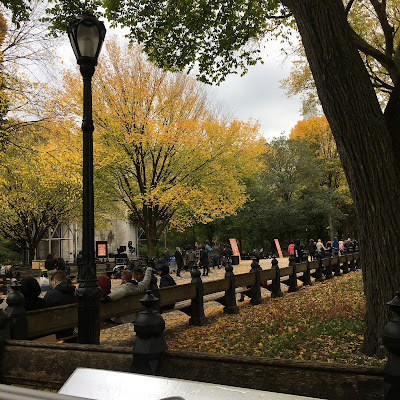 I had no such luck yesterday, and actually was not able to discover just what was being filmed.  I think it was for a television program. 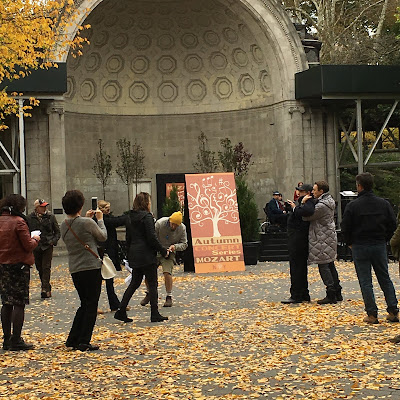 The above scene seemed to involve some sort of mugging encounter.  I witnessed several "takes," and got the impression that more would be required.

Should I eventually discover what was being filmed, I will update this post.  Until then, this increasingly lazy blogger thanks you all for your visits and comments.  I will endeavor to be better at visiting your posts.  Wishing you all a very Happy Halloween!

I am horrified to update this post after this afternoon's downtown terrorist attack.  It now seems as if those NYPD sidewalk barriers might well have been a proactive attempt to prevent a similar attack.  What a world.
Posted by Frances at 12:45 PM 61 comments: