It's now Halloween evening in New York, and I would like to share some photos I took this afternoon on West 69th Street, where October 31 is always a very special day and night. 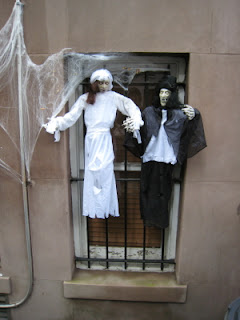 West 69th Street is a tree-lined street dominated by classic brownstone houses.  There are a few larger buildings, and even an Episcopal church on this street.  There are no tall buildings.  It is a street that has a quiet intimacy, from which residents have drawn to create an October wonderland for neighborhood children. 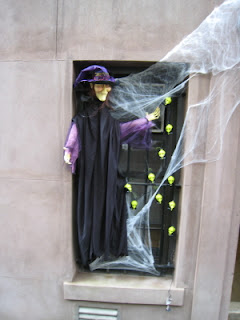 The decorations and open houses are a collaborative effort. 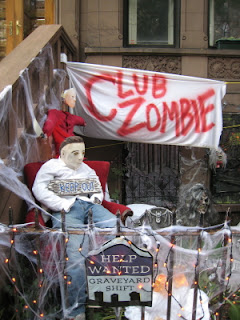 Try to ignore the garbage receptacles in the background and enjoy these three witches at work stirring their cauldron. 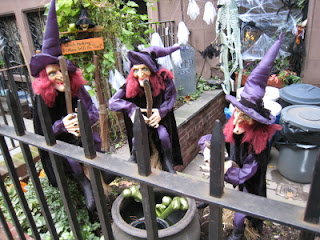 Cobwebby effects pervade the street.  Do you spot the bat in the web, do you see the Eye on the window shade?  Do you remember seeing it in a photo last year?  That eye becomes very scary after dark. 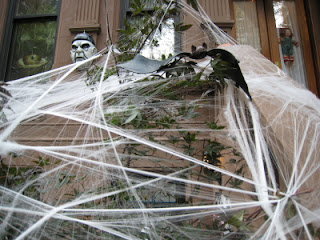 Would you want to enter this doorway, even for a treat?  You would have to pass below the witch and a collection of flying bats.  Just asking. 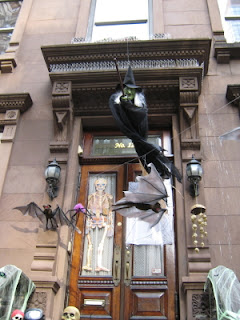 Art history students are not ignored on this street.  Is the frame perfect? 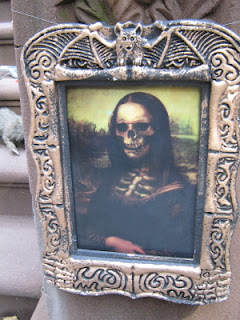 Please do not think that the organic side of Halloween is ignored on West 69 Street.  That roped canvas in the upper left of the photo is part of a pirate ship that will be revealed after sundown. 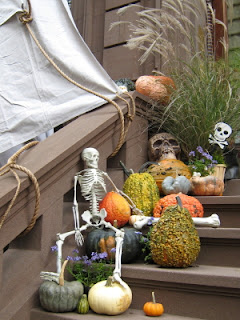 The neighbors are so friendly, always waving a howdy! 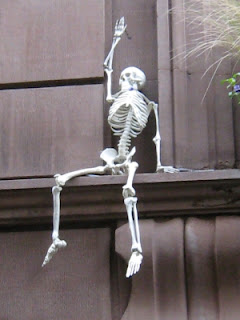 Well, here's that welcoming witch again.  does she look more friendly from a side view? 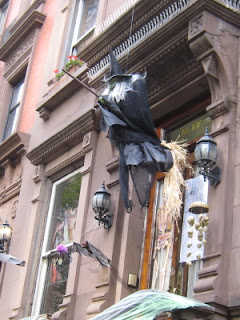 Parking is always a challenge in New York, no matter what sort of vehicle is used. 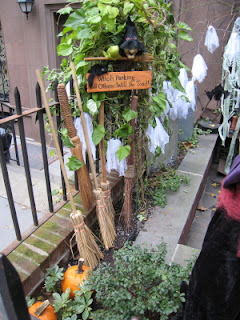 Well, I think if you had the courage to enter the house guarded by that flying witch, I will give you another test.  Mind the bat. 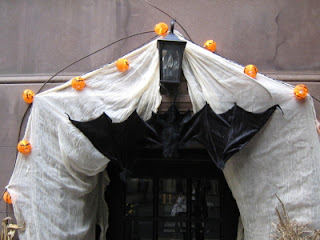 Sweet dreams to you all.  I have a bowl full of candy, hoping that there might be some trick or treating children in this building who might trade a view of their costume for a bit of chocolate.  Not sure that anyone will ring the doorbell.

It's now eight pm and the adults are taking over the celebrations.  There's a crazy Halloween parade just beginning downtown. 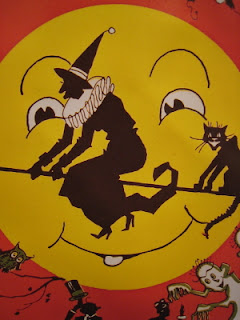 That whimsical seasonal image is taken from one of my favorite calendars, Cynthia Hart's Victoriana 2011 Calendar.  Each month features a collage assembled from a very rich assortment of yesteryears' glories.


Later on today, I'll try to take my camera for a walk around the neighborhood to collect some current Halloween images to show you all.


However, first I wanted to tell you about the weekend trick that Nature played on us.


New York City is often used as a film location for movies, television  and advertising.  It is not too unusual to see pseudo snow blanketing a small area of a street in July.  That area will have to be treeless, because it is hard to make a snow scene seem real with lots of leaves on the trees.  Or is it? 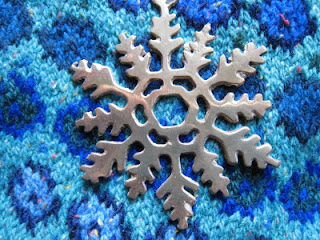 Our autumn weather has been gradually settling in, with only the yellow leaves making their appearance around town.  There has been no sign of the auburn shades yet.

As I looked out my front window on Saturday, what do you think I saw?  Inch-wide floppy white snowflakes flying through the air!  I have never seen snow falling while trees still held on to their green leaves.  I somehow thought of that old tune Season of the Witch.

Of course, this unusual sight quickly motivated me to get outside on my necessary errand rounds, with a quick midday toasted cheese sandwich and cup of tea in between rounds.  By the time I bundled up in my down coat (down coats do not usually get worn before late November) and went out for the final errand mission, the sidewalks were beginning to accumulate lots of slushy ice.  I was quick in my rather abbreviated mission and then enjoyed the rest of Saturday from my cozy apartment.

This very freaky storm did lots of damage to lots of trees.  Central Park alone has lost over 1000 trees, many more than were downed as a result of last summer's Hurricane Irene.  Heavy, wet snow on leaf-bearing trees creates a bad combination.

In many suburban New York areas, folks will be without electricity for another day or two, due to so many fallen trees connecting with overground power lines.  I consider myself very fortunate not to have been inconvenienced.

And so again, I wish you all a Happy Halloween, and advise you to concentrate on treats, and to beware of tricky surprises.

It's been quite a while since I last wrote.  Before offering up my alibi, I would first like to thank all you kind folks who've left lovely messages

Not long after that prior post I got sick, catching some sort of cold that had a big bad cough as its sidekick.  Around the same time, demands of my job ratcheted up a bit.  Not a great combination, but I am delighted to report that weeks later there's improvement on all fronts.

About the time that my cough was on the upswing, I chose to go ahead with a long-planned get together with the truly marvelous, well-traveled Vagabonde, who was visiting New York with her husband.  Yet again, I experienced that wonderful feeling of meeting a fellow blogger and having the sense that we've known each other for a long, long time.  Even better,   neither Vagabonde nor her husband seem to have taken my cough home with them as a New York souvenir.

By last weekend, I was feeling much better, and ventured over to Fifth Avenue to have a glimpse of the Hispanic version of the Columbus Day Parade, in which contingents from all the Central and South American countries settled by Spain show the rest of us their costumes, music and dance.

The weather was perfect. 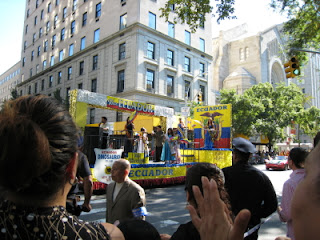 So many bright colors and fantastic costumes for men, women and children. 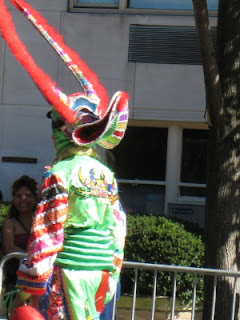 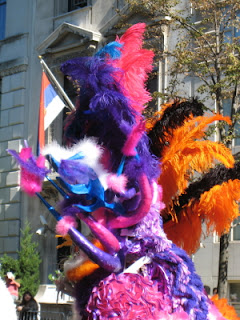 You can see from the view of the sidewalk that there were very small numbers of folks viewing the parade.  The parade's route used to run from midtown all the way up Fifth Avenue to 79th Street.  No longer.  This year's route was barely a mile long.  I hope that this does not signal a trend toward shrinking festivities.  The "big" Columbus Day parade, honoring Italy, is held on Columbus Day and draws much larger crowds.


Look at these adorable children!  I hope to see them again next year. 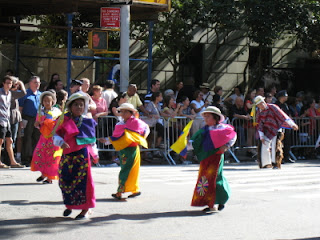 This next fellow looks a bit fearsome.  I guess that I also look forward to seeing him again next year. I think that this lady with parasol will also be wanting to join the parade in October 2012. 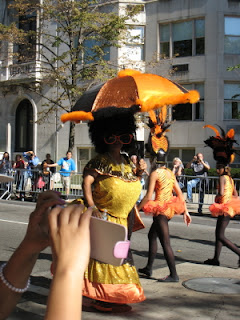 I left the parade route and walked a bit further up Madison Avenue, stopping for a delicious hazelnut gelato, and engaging in some window shopping.  I liked the clean lines and harmonious colors of these textiles.  Somehow, I cannot remember the name of the shop! 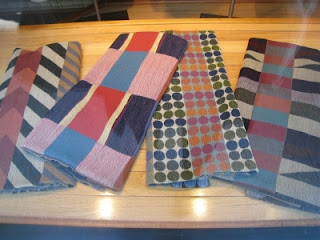 Refreshed by that gelato, I then walked back across Central Park to the West Side, and admired the view of the different greens in the sun and shadows of the Sheeps Meadow, with the Central Park South buildings in the distance.  It was a bit too cool for any sunbathing, but perfect for ambling around, playing with frisbees, or just sitting and talking. 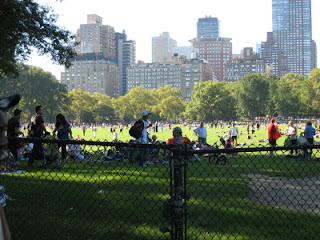 And so, that Sunday drew to a close, and another work week began.

Look at the amusing shiny blue bird with silver ball that has appeared overnight on the entryway to my local subway station.  How can you possibly look at this and not smile? 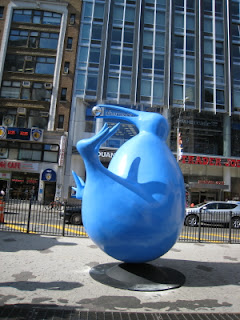 Here is another view to show you the joyous attitude that this very big bird wants to share with all of us passersby. 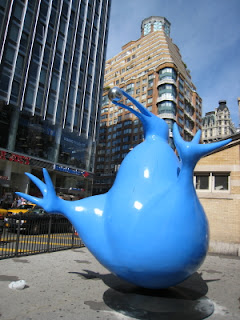 Tomorrow morning when I set out on my commute to work I am counting on this gleaming vision to work its magic.  (I promise to try to find out more about the identity of the sculptor.)

Best wishes to you all.