It is still cold here.  Snow may or may not fall again before sunrise tomorrow.  Strangely, that weather report seems to be all too familiar to me, and perhaps to those of you who've been reading my recent posts.

It was too cold to go to the St. Patrick's Day parade, even though I had made myself a cozy green-hued hat for that occasion. I've photographed that hat against some Liberty flowered cotton with the notion that I might encourage spring warmth to arrive.

While waiting for that warm weather bus that just does not seem to arrive here, I have been doing more wooly knitting.  I am adding the fair isle cowl to my Foakley Arts etsy shop.  It's knit as a tube and hand stitched together. 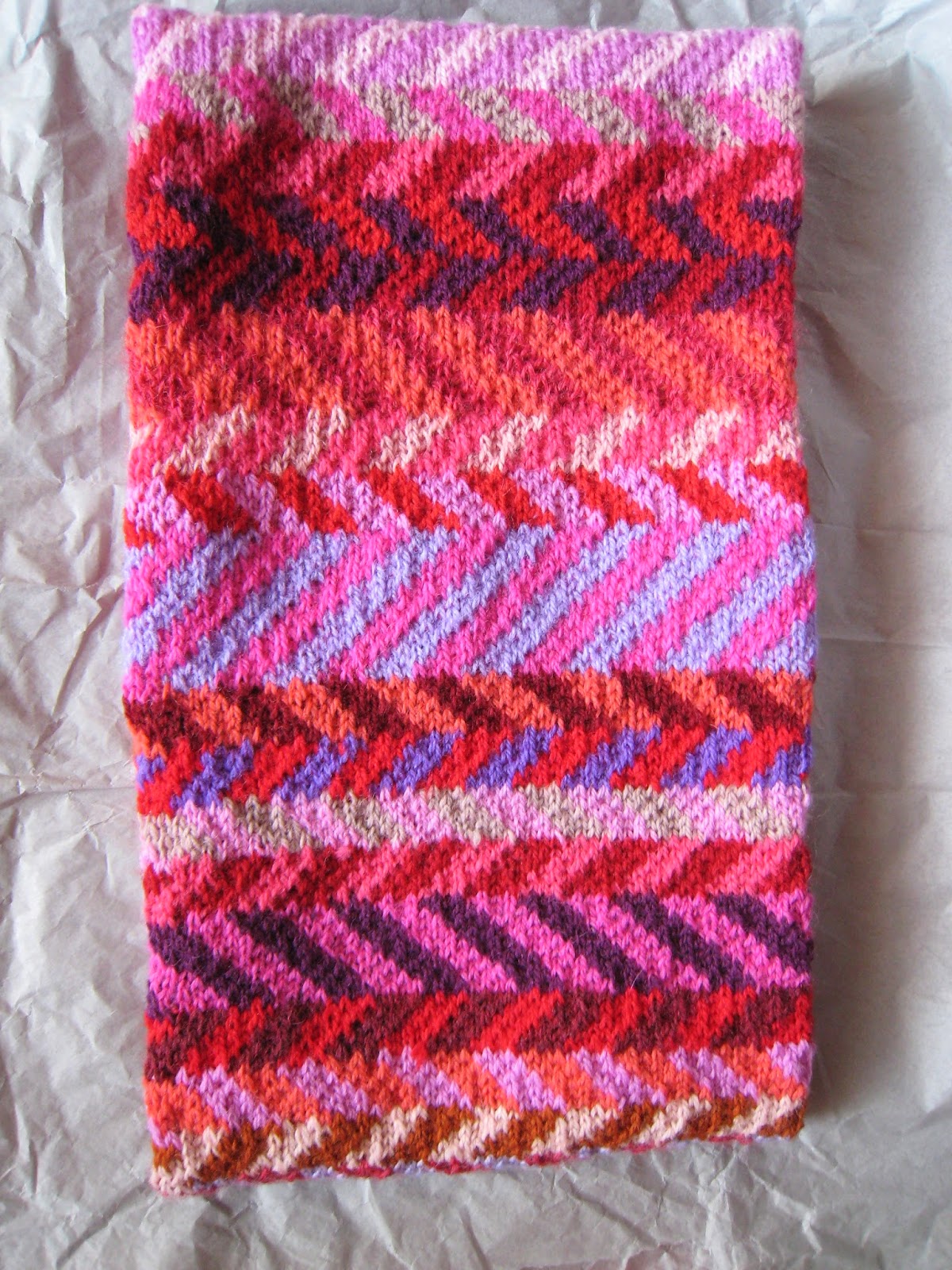 In the following photograph you can see the inside and the outside. 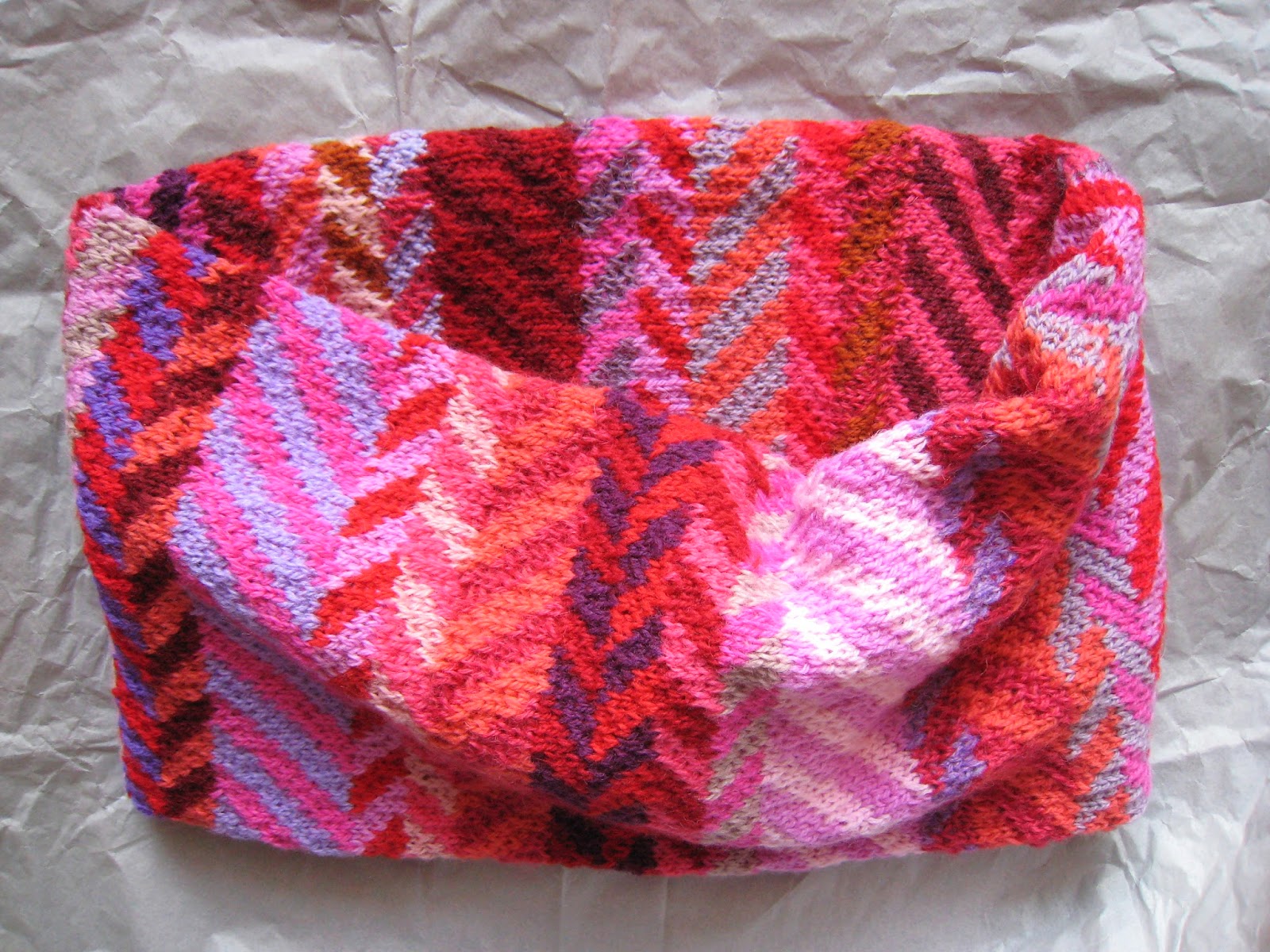 Long after Ysolda Teague's Follow Your Arrow mystery knitting project officially concluded, I actually finished my version of the wrap.  It was so much fun to work my way through the clue options and to learn how to read the stitch charts. 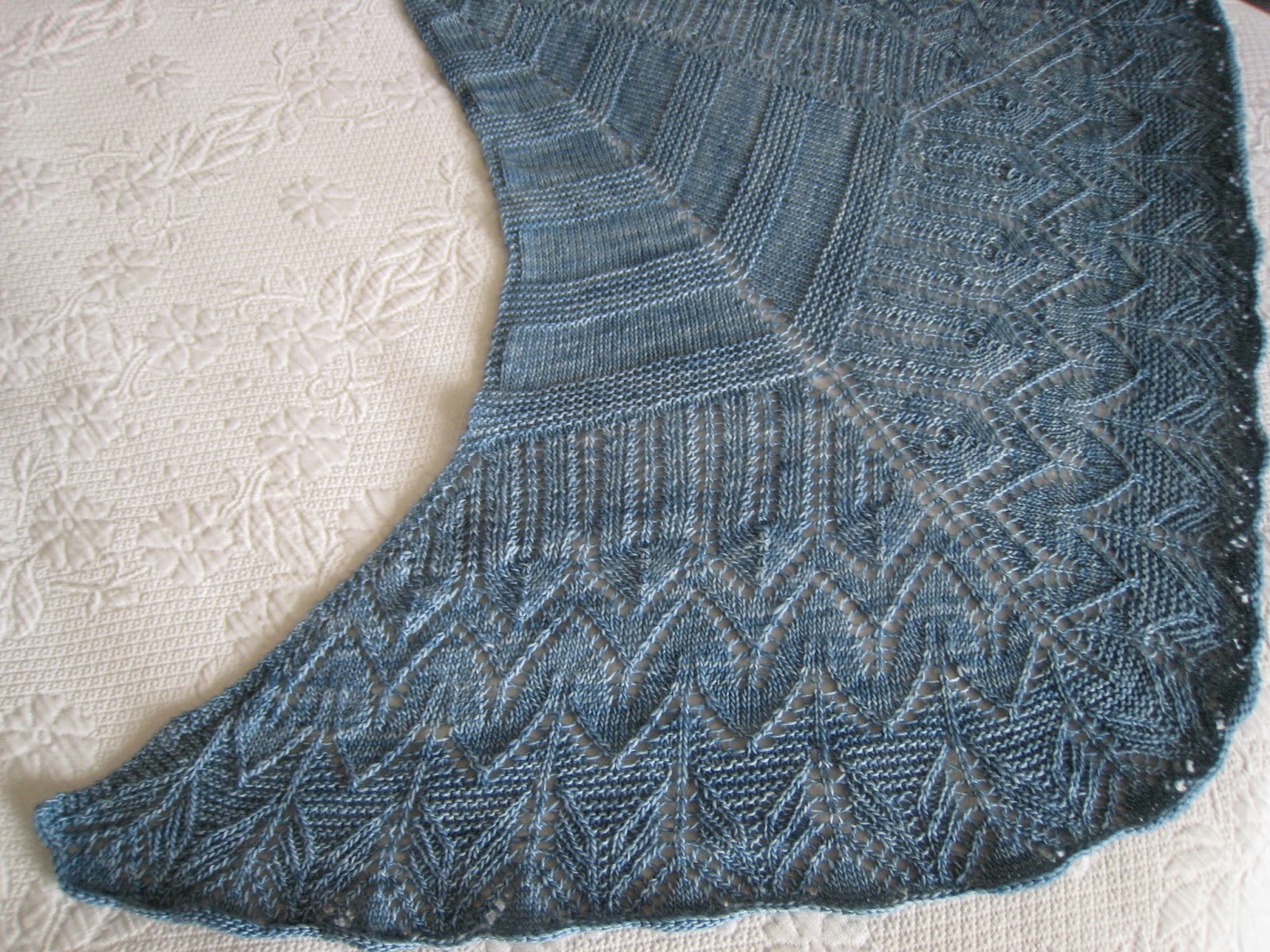 The above photograph shows one of the angles of the wrap's wingspan, and the following photograph gives you all an idea of the intricacy of the various stitches.  Can you see those many arrow shapes? 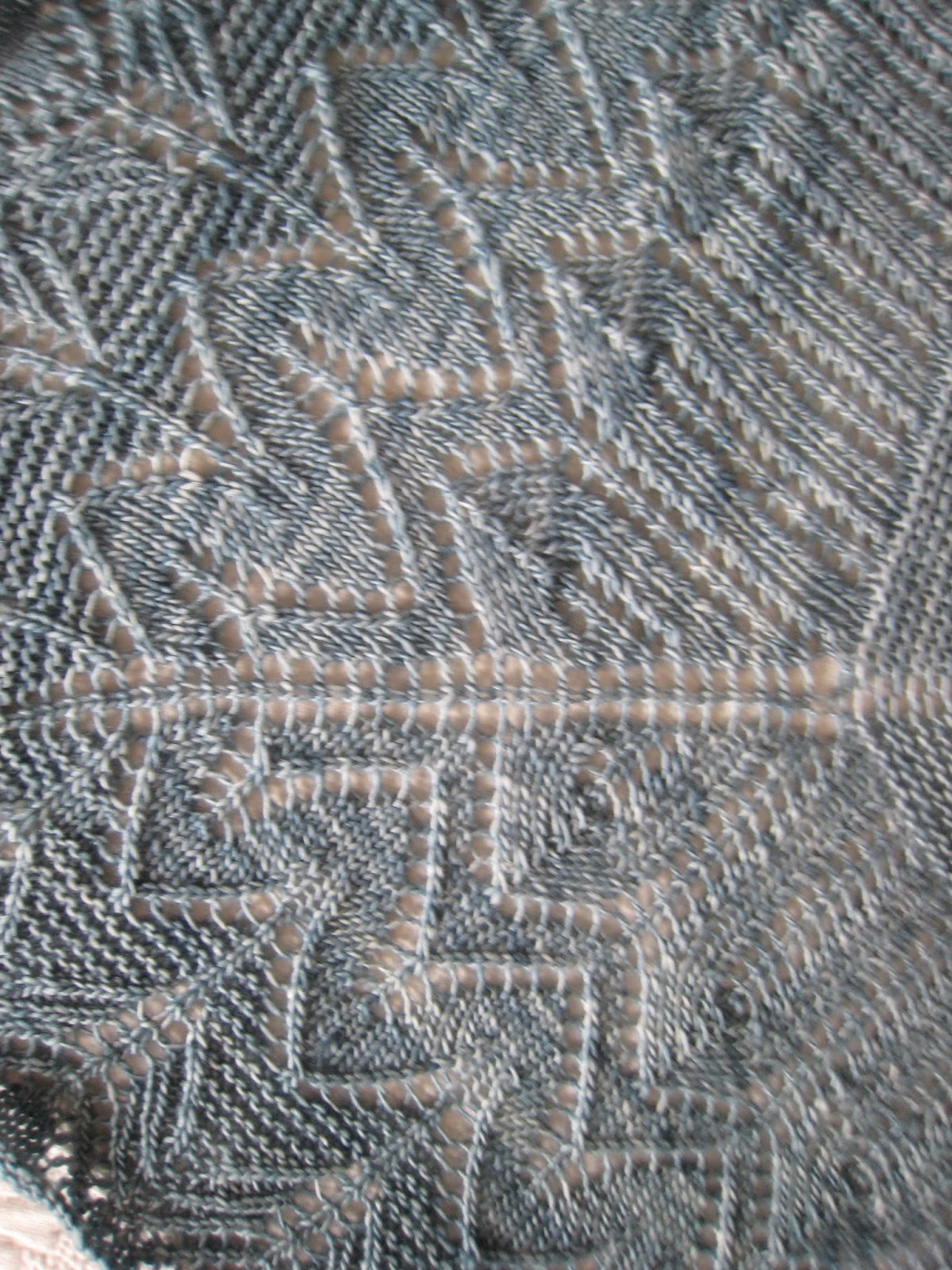 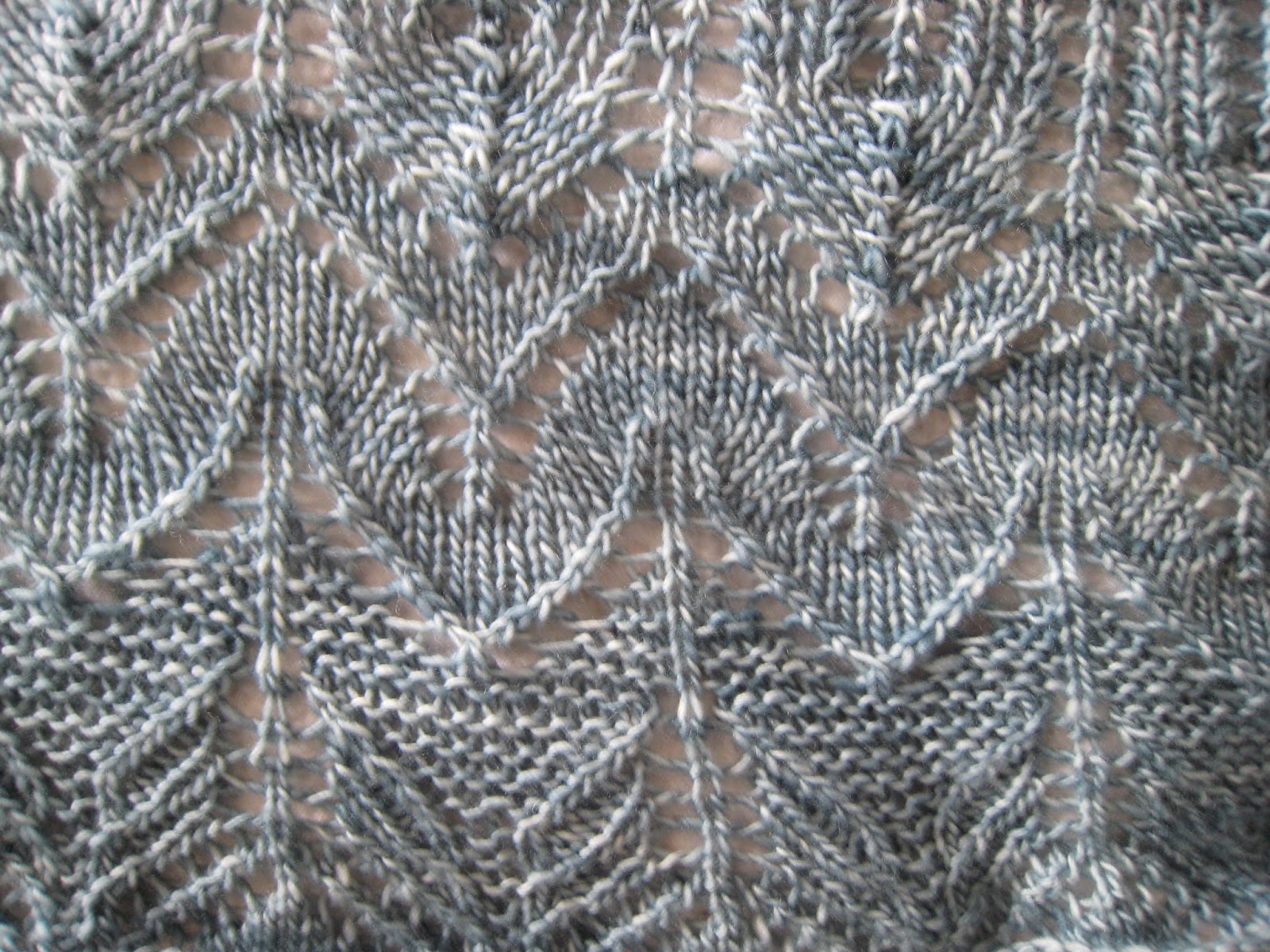 I wish that all of you could visit The Museum of Modern Art to see the two splendid exhibits that I saw yesterday.  The Gauguin: Metamorphoses show focuses on Gauguin as a printmaker, with lots of his woodblock prints and watercolor transfer monoprints on display. 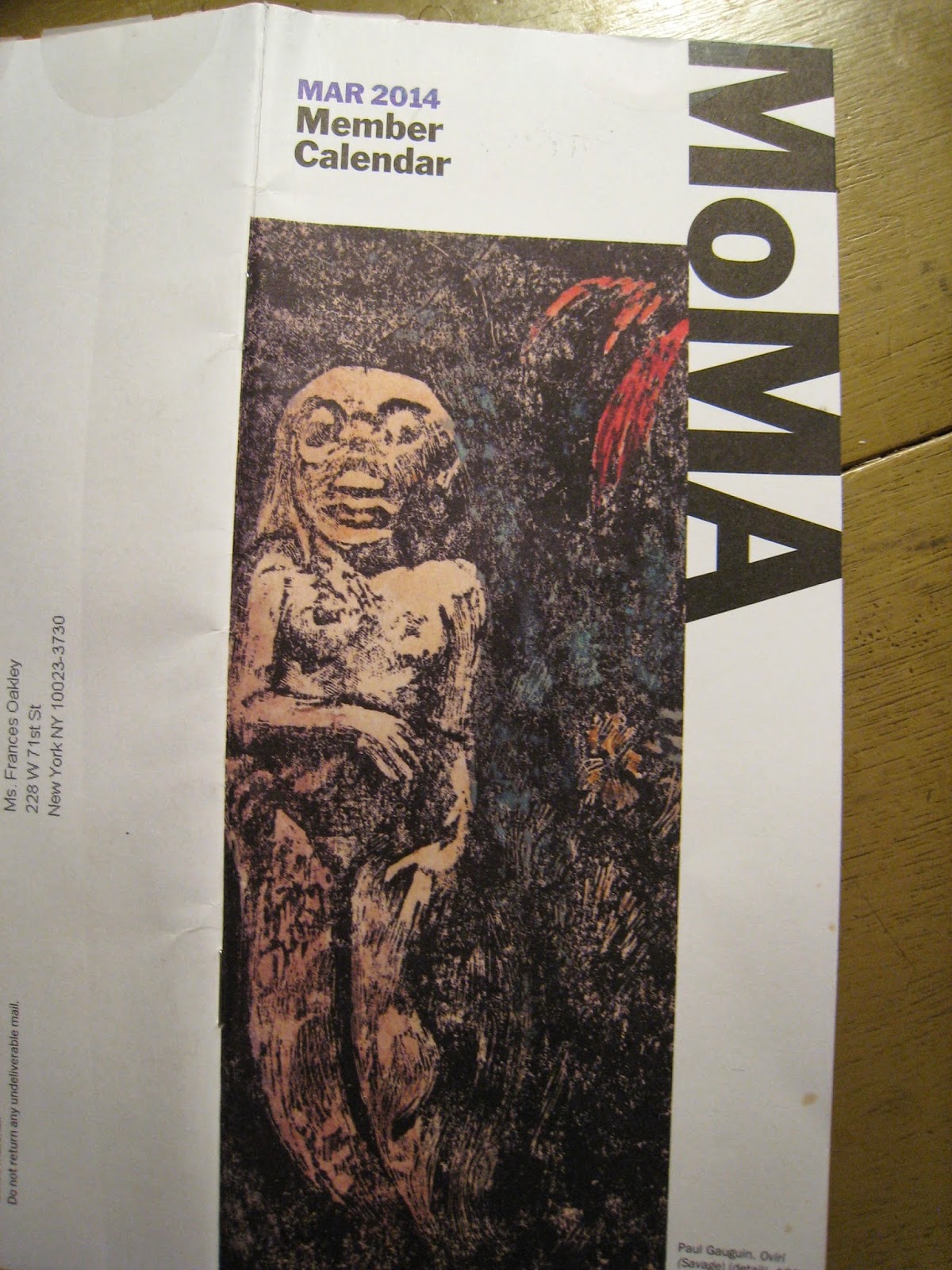 There are also quite a few oil paintings and wooden sculptures.  Oh...it's a real treat to also see lots of the actual wood blocks carved to made the prints.  Quite a few of the prints were printed by Gauguin himself in Tahiti.  I know that I will be visiting this exhibit more than once.

The other exhibit that my friend and I saw was also interesting in that it revealed some insight into the artist's process.  Jasper Johns recently produced these drawings, prints and paintings after being inspired by a rather crumpled up photograph of the late artist Lucian Freud.  I would also highly recommend this show.

Back to knitting.  A recent post by Kristen over at Cozy Things showed what fun she had making some crocheted buttons to accent one of her beautifully knitted sweaters.  She reminded me of some similar buttons I made long, long ago in the early 1960s, when I was about 15 or 16, to accent cabled cardigans I'd learned how to make. 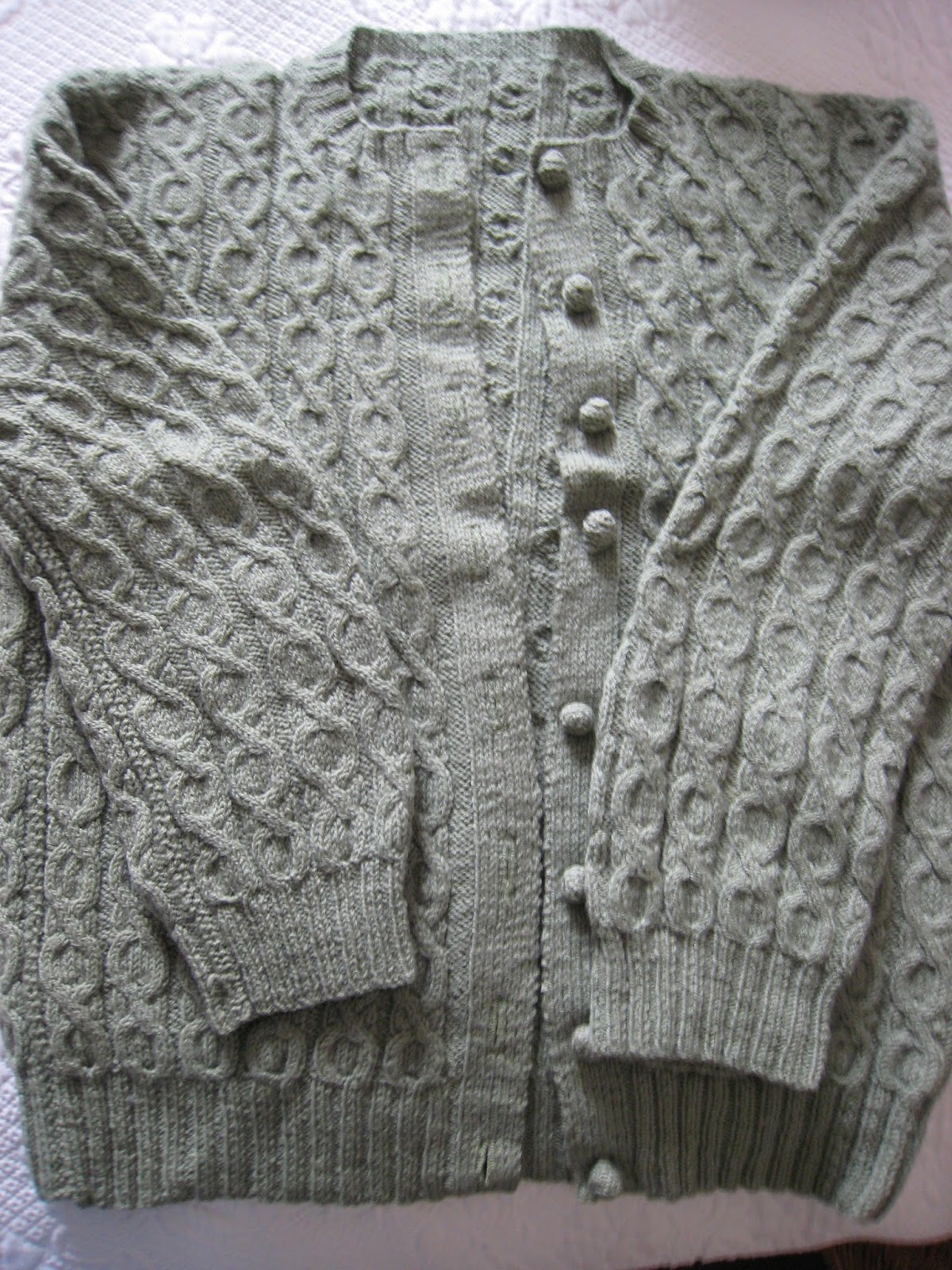 I thought that you all might be interested to see one of these now very vintage examples of my early knitting days.  The sweater still fits!

Here's a close up view of those crocheted buttons. 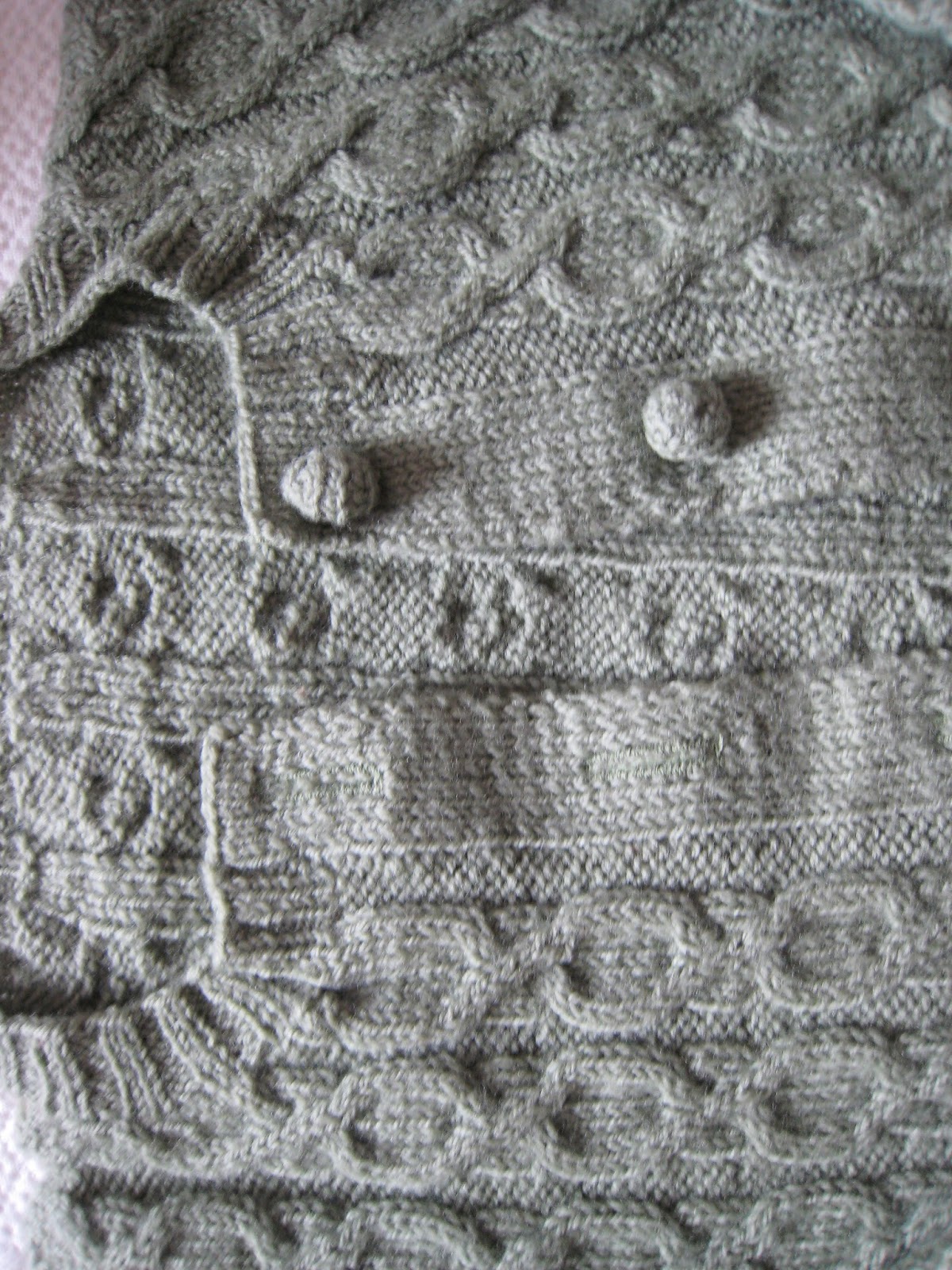 I've got a little more knitting to work on this evening, and may just be watching some television on the side.

Back to work for me tomorrow.  I hope that there will not be any snow to shovel.

Thank you all for your visits and comments.  I do promise to take you all for a good spring walk around town very soon.  It will be so good to be able to leave my down-filled coat in the closet!

Last weekend, our country did its annual switch over to Daylight Savings Time.  It's grand coming home from work most days before the streetlights go on.  It will also be grand when the weather warms up to a consistent spring-like temperature.  Yes, we've enjoyed 60 degrees F today, but clouds are now arriving to bring rain that might turn to snow overnight and result in chilling our air back down below the freezing point tomorrow.

Enough is apparently not enough. 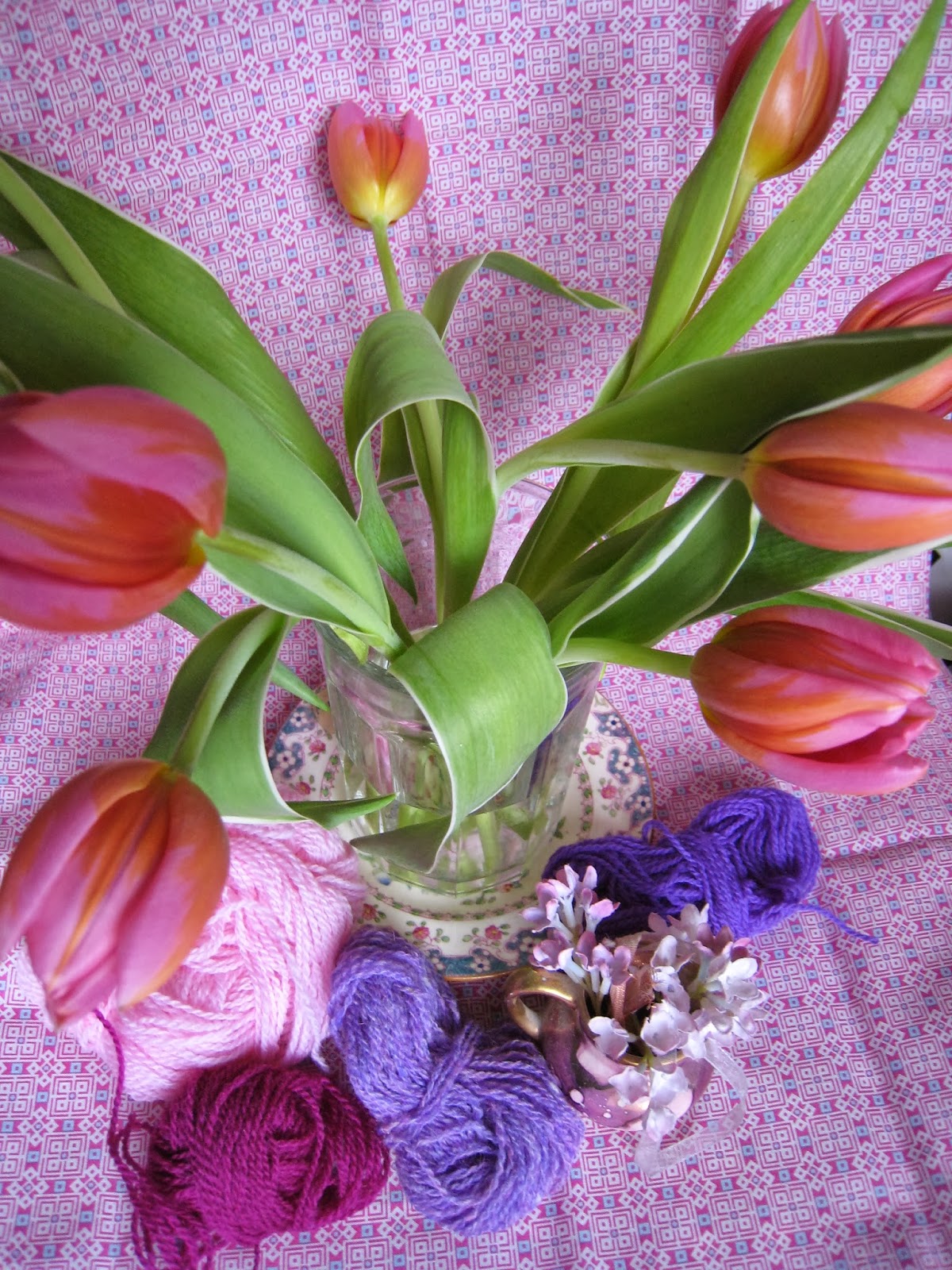 I decided to bring home some pink and coral tulips home along with my groceries.  Just seeing these blooms does help convince me that winter is in its final days.

One effect of the imminent spring arrival is the notion that we might soon not be wishing to wear so many woolen layers.

I've now celebrated this notion by offering international delivery to customers over at my Foakley Arts etsy shop.  Those of you who visit the shop will notice that I am keeping the same modest shipping fee for domestic or international deliveries.  I am hoping that this might entice some of you folks who live abroad to sample some of my knits.

Since I do love to knit, I plan to continue adding items to the shop as the months go by.  I may also be adding some non-wool knits and even some other examples of my creativity.

Thank you all for your visits and comments.  I know that I have hinted about a possible spring holiday across the Atlantic.  However, some recent expensive visits to my dentist have encouraged me to postpone that holiday dream for a later season.
Posted by Frances at 2:19 PM 21 comments:

I am pleased to report that the temperature rose a bit on Saturday and I headed over to Central Park for my very first 2014 walk in the Park.  I cannot recall another year in which I avoided such walks for so long. 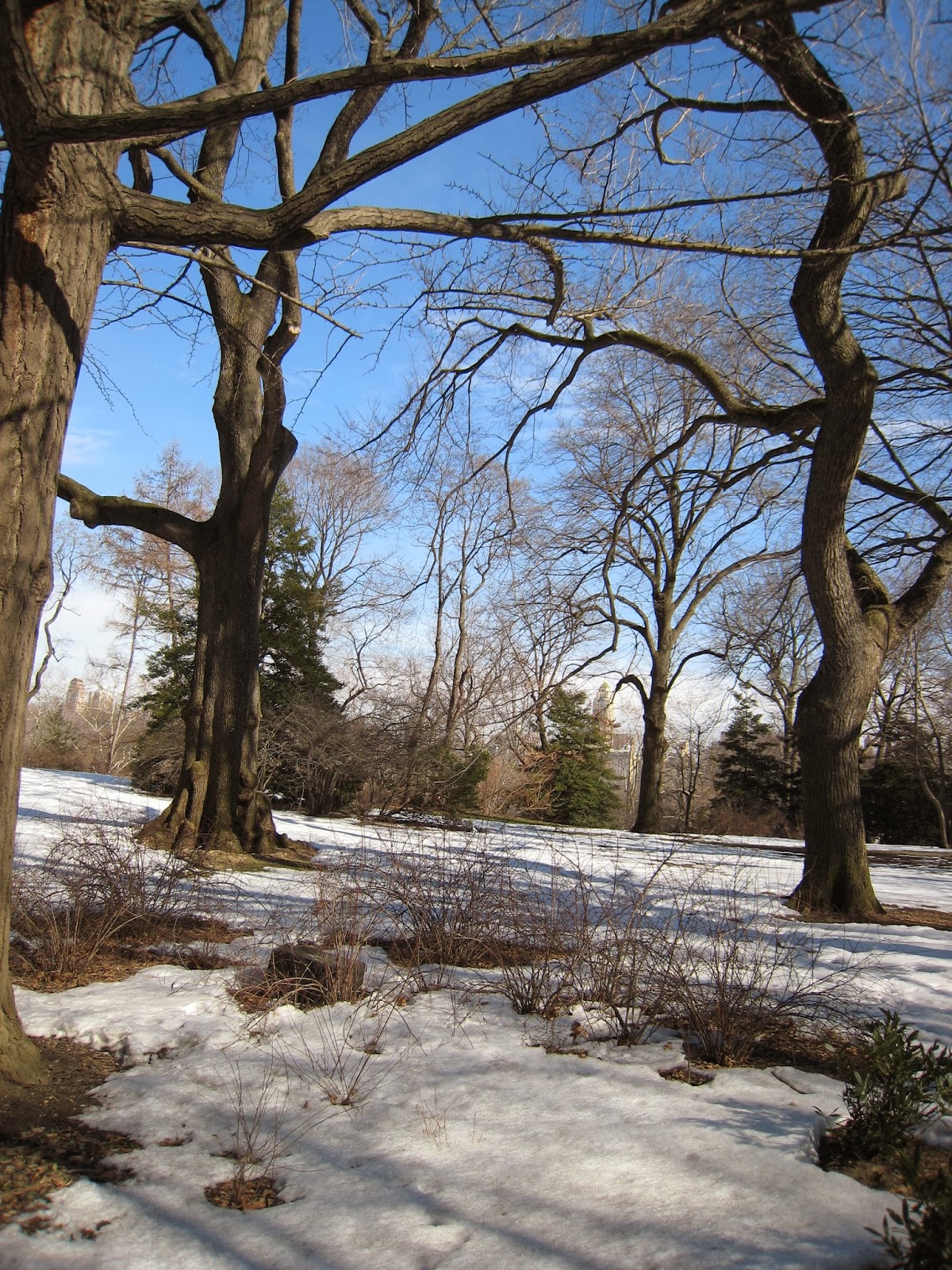 You can tell from my photographs that it was a sunny day and that snow still is covering lots of the ground.  I kept my gloves on against the chill, and so my camera clicks were awkward and limited. 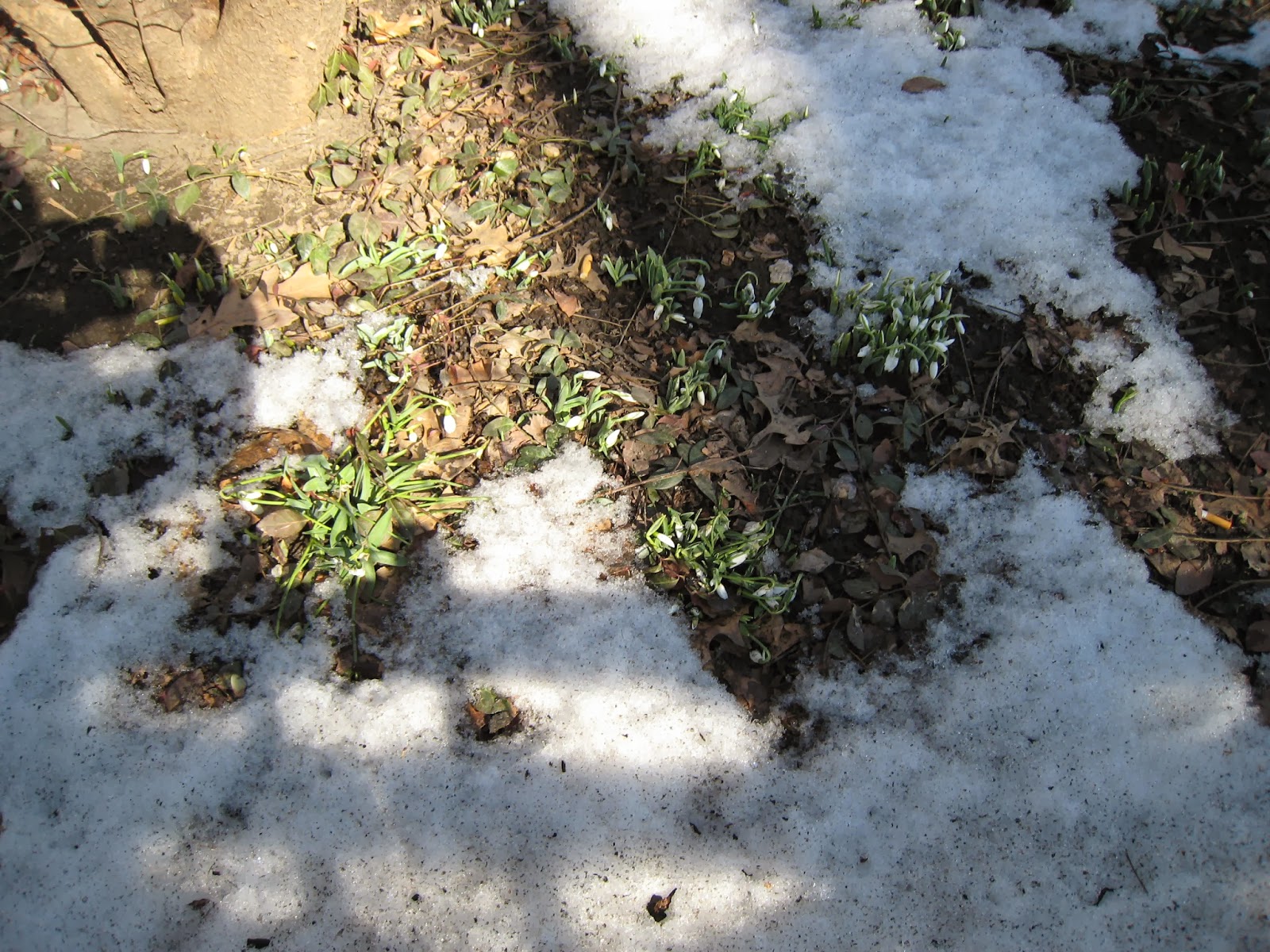 Scattered around the Strawberry Fields area were some sunny patches.  Some snow had melted away.  Some beautiful tiny snowdrop flowers were starting their annual performance. 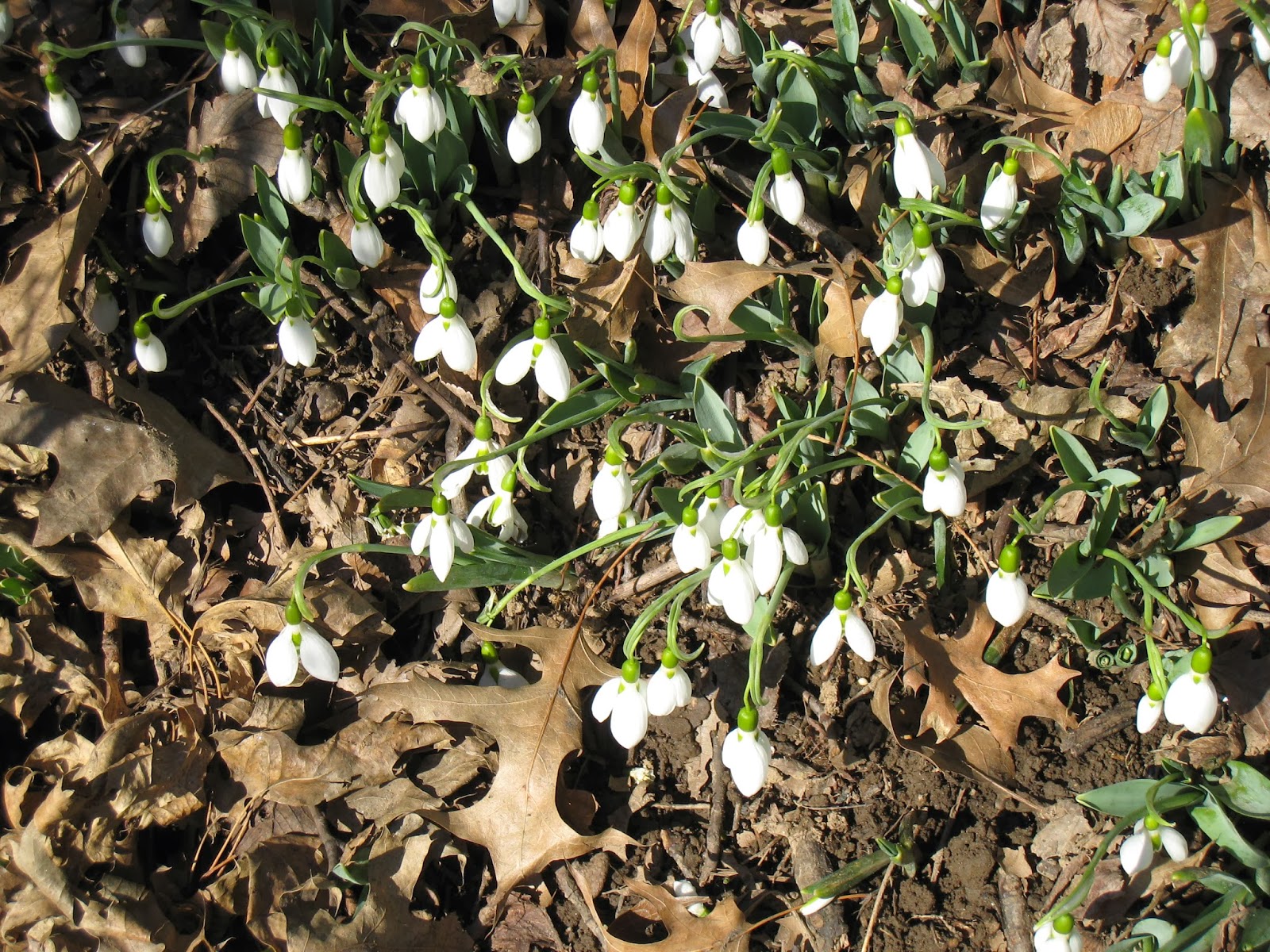 As I neared the western edge of the Lake, I spotted a refreshment stand.  I can only imagine how cold the person manning this cart must have been.  Even with the sunshine.

The Park sidewalks and roadways were well cleared and a few folks were riding bikes, running and walking along while enjoying the fresh air. 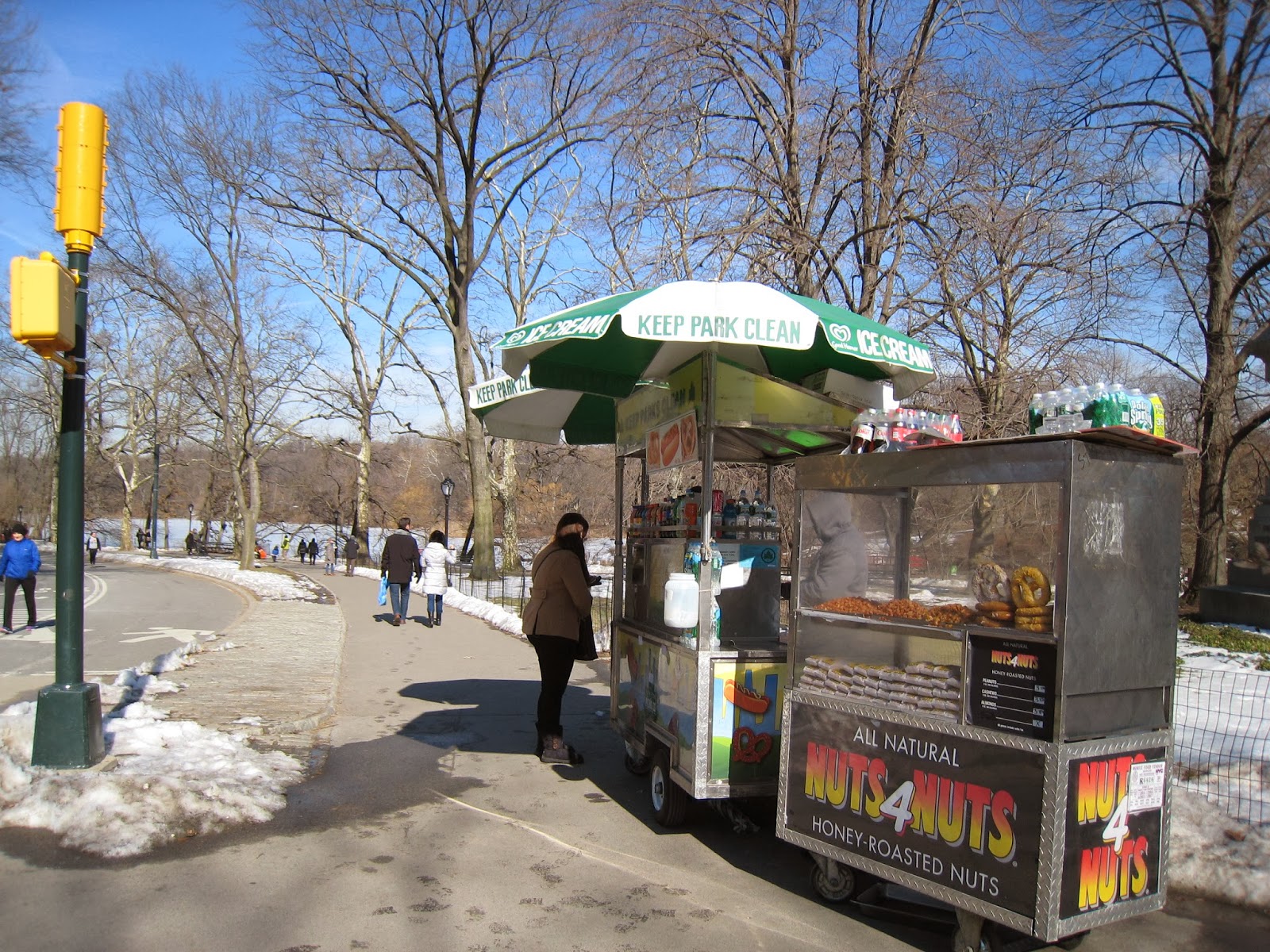 The Lake seemed to be solidly frozen after the weeks of sub-freezing days and nights.  There were lots of warnings posted about the possibility of thin ice, and measures to take in case of an emergency. 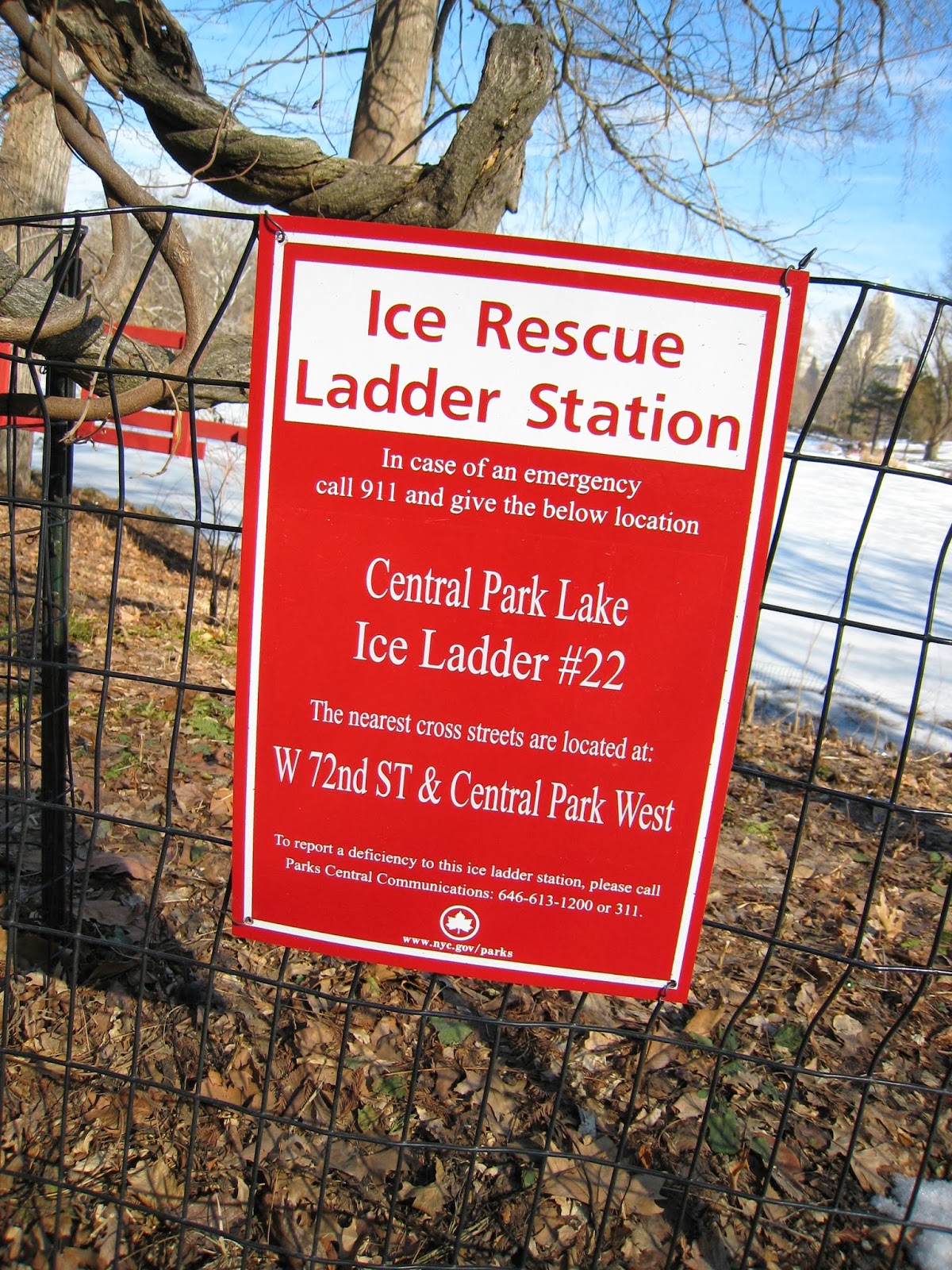 I am glad that I saw no folks venturing out on the ice and no need for the use of these red ladders. 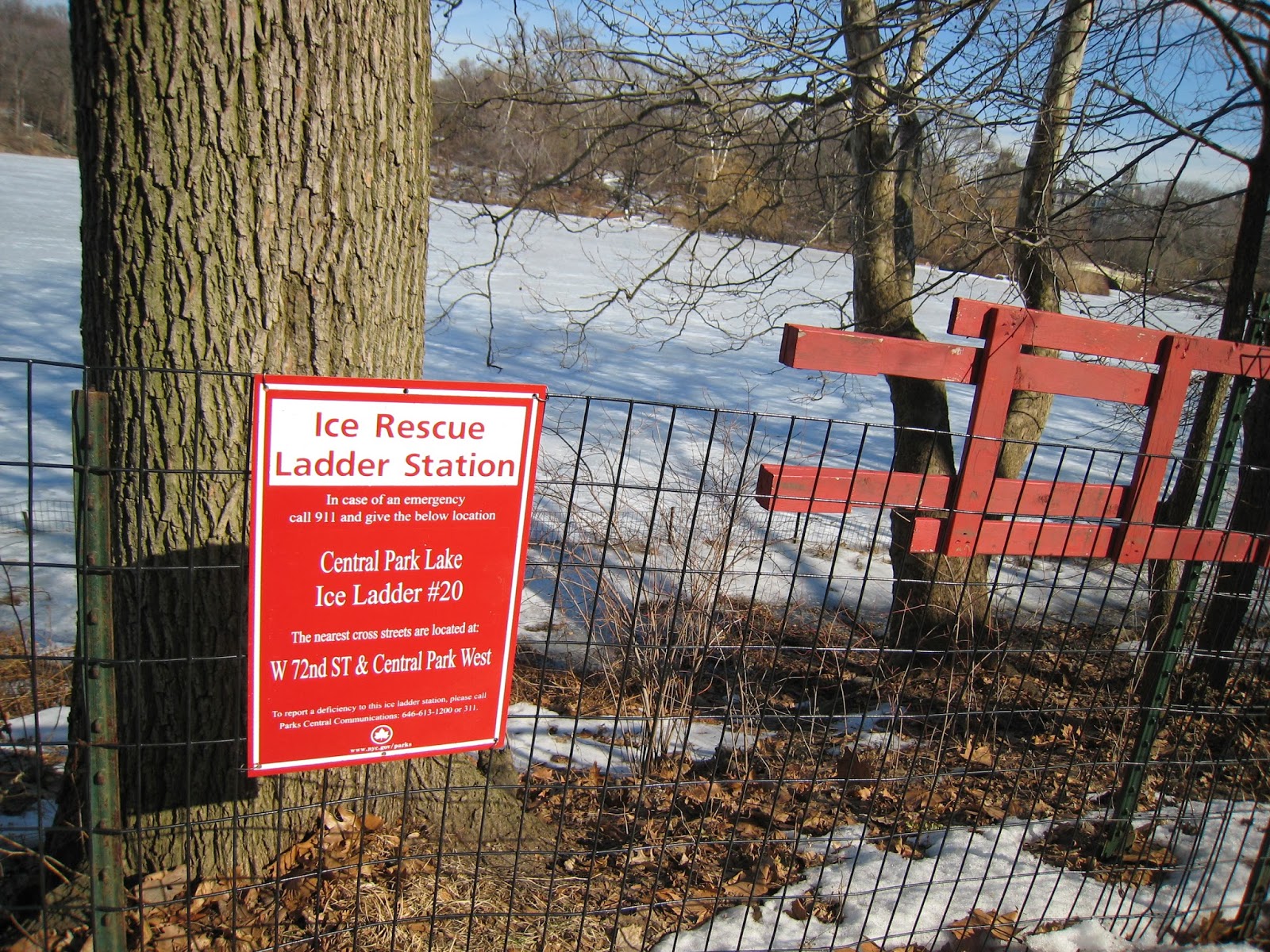 A great variety of ducks were, however, making the most of some areas near the Lake's western border, where the ice had been broken up to allow them to swim, or graze amongst the green shoots on the bank, or even do some walking on the ice. 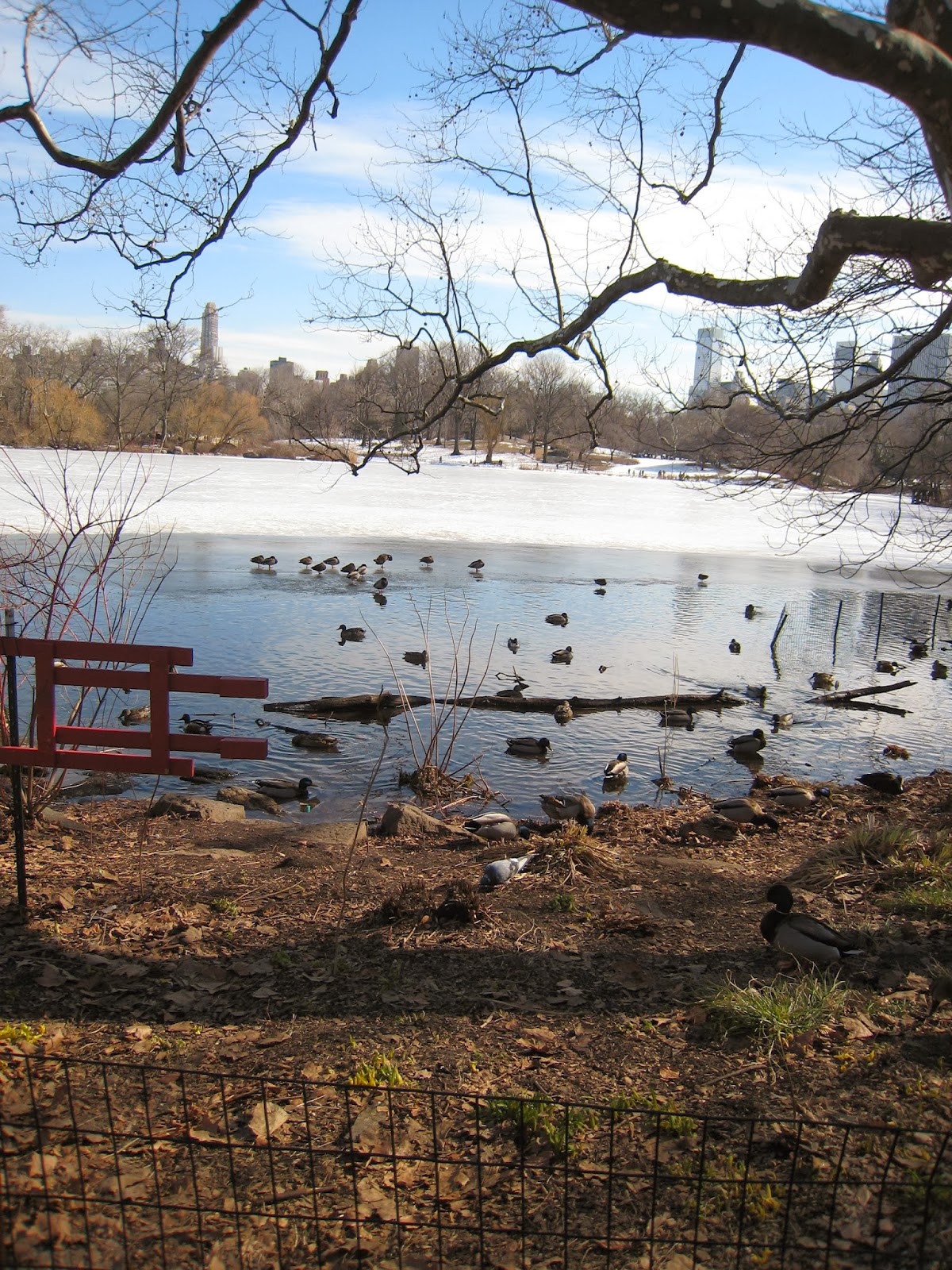 I had never before seen such a variety of ducks in one concentrated area.  It was party time for ducks, with a few pigeons crashing the event. 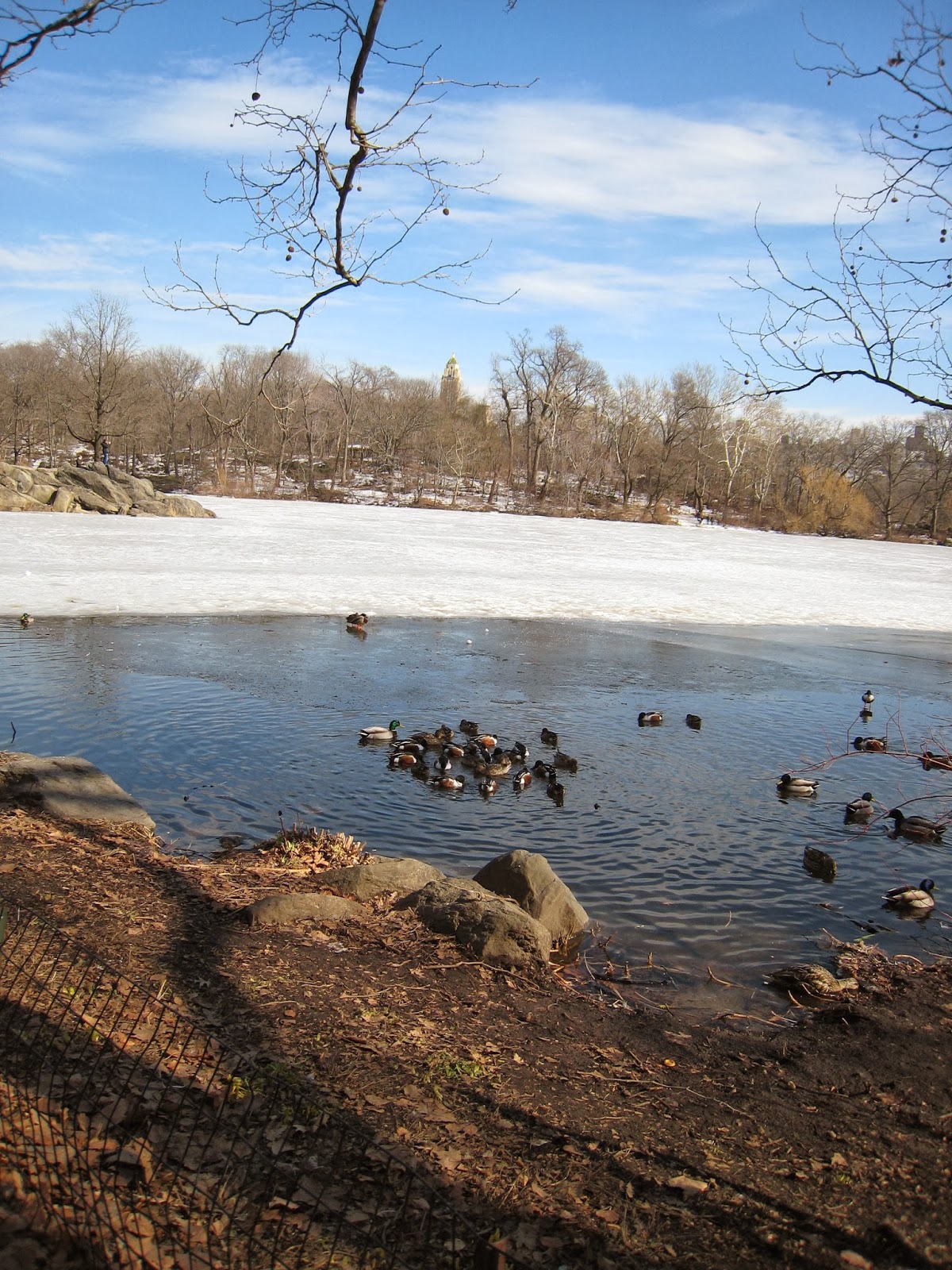 Continuing my walk over to the Shakespeare Garden showed me that it would be a long time before any Spring flowers bloomed there. 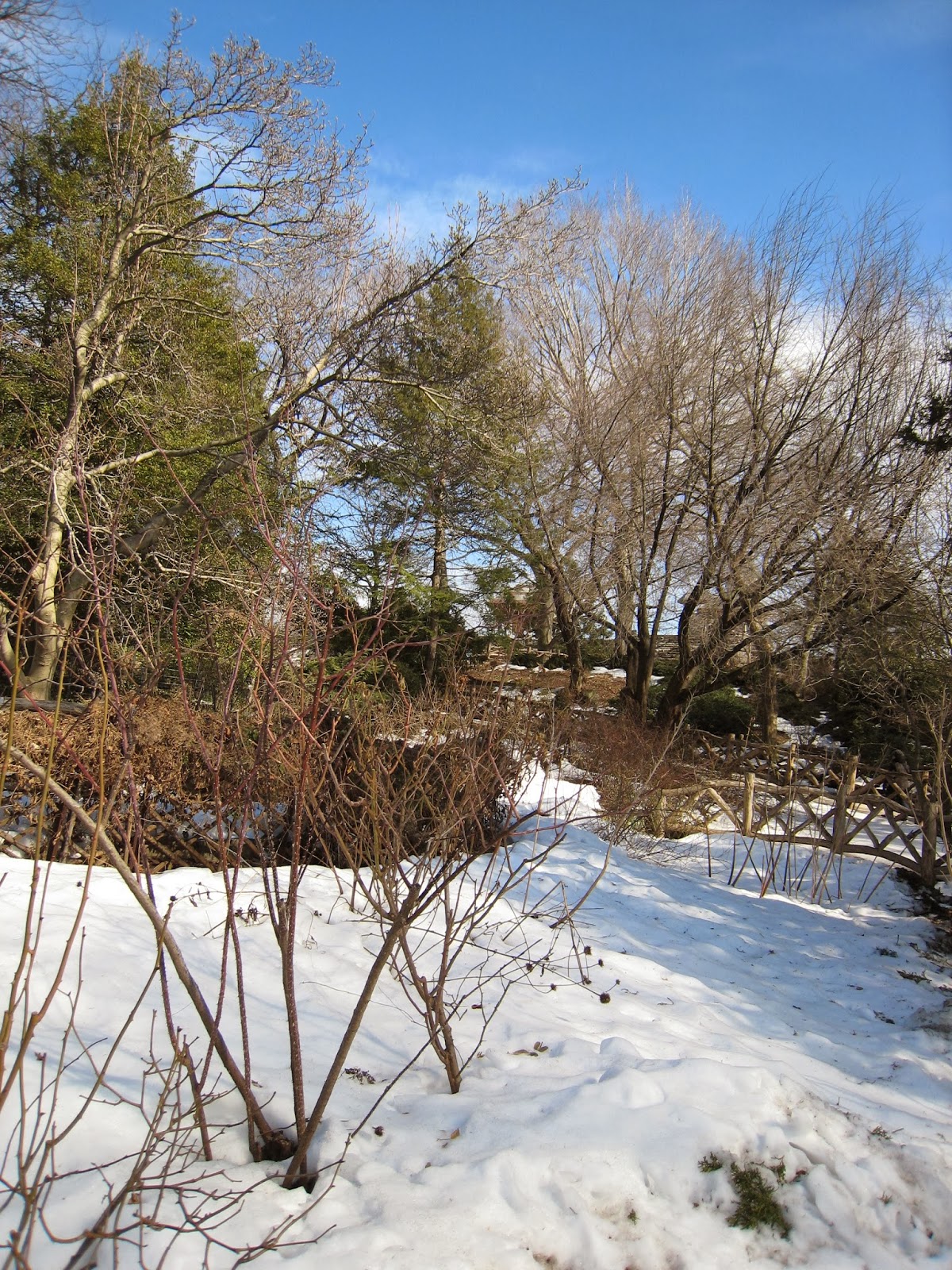 The shadows were beginning to lengthen, and my fingers were feeling the cold, so I decided to head on home.

The following photograph is certainly not beautiful, but shows you all another facet of our long winter.  Right in front of my apartment building last week, a dangerous electric hot spot was discovered.  The recurrent snow, sleet, street plowing, salting of the streets, etc. have caused lots of damage to the streets.  Potholes are abundant, and the City forces have been trying to keep the repairs going strong.

These electric hot spots are a result of salt water seeping through manhole covers into the below ground area of electrical wiring.  Folks, and pets, have been injured by walking on these parts of sidewalks and streets, and so now the City has vehicles with equipment able to detect such dangers traveling around the City.  When such a danger is found, the area is blocked off, and a City inspector/observer/guardian is sent out to remain parked in an adjacent curbside area 24/7 until the dangerous situation is corrected.  I have never seen this before. Out curbside guardian/s remained at their post for almost a week until Saturday's repair crew arrived to take care of the hot spot.  I think that the guardian post might also be connected to avoidance of lawsuits against the City. 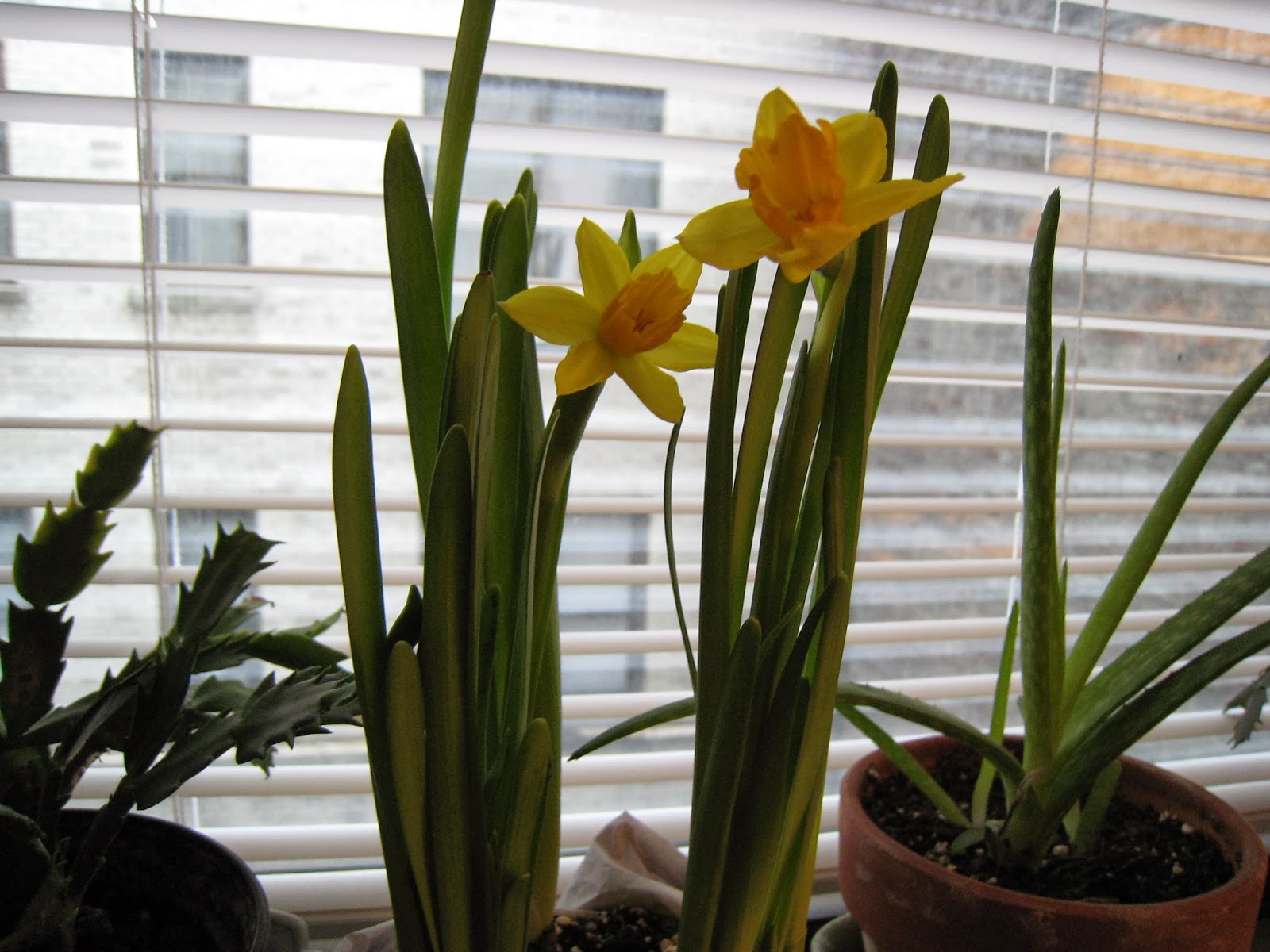 Back indoors, I continue to try to imagine that Spring will soon arrive.  My tiny daffodils are very cheery. 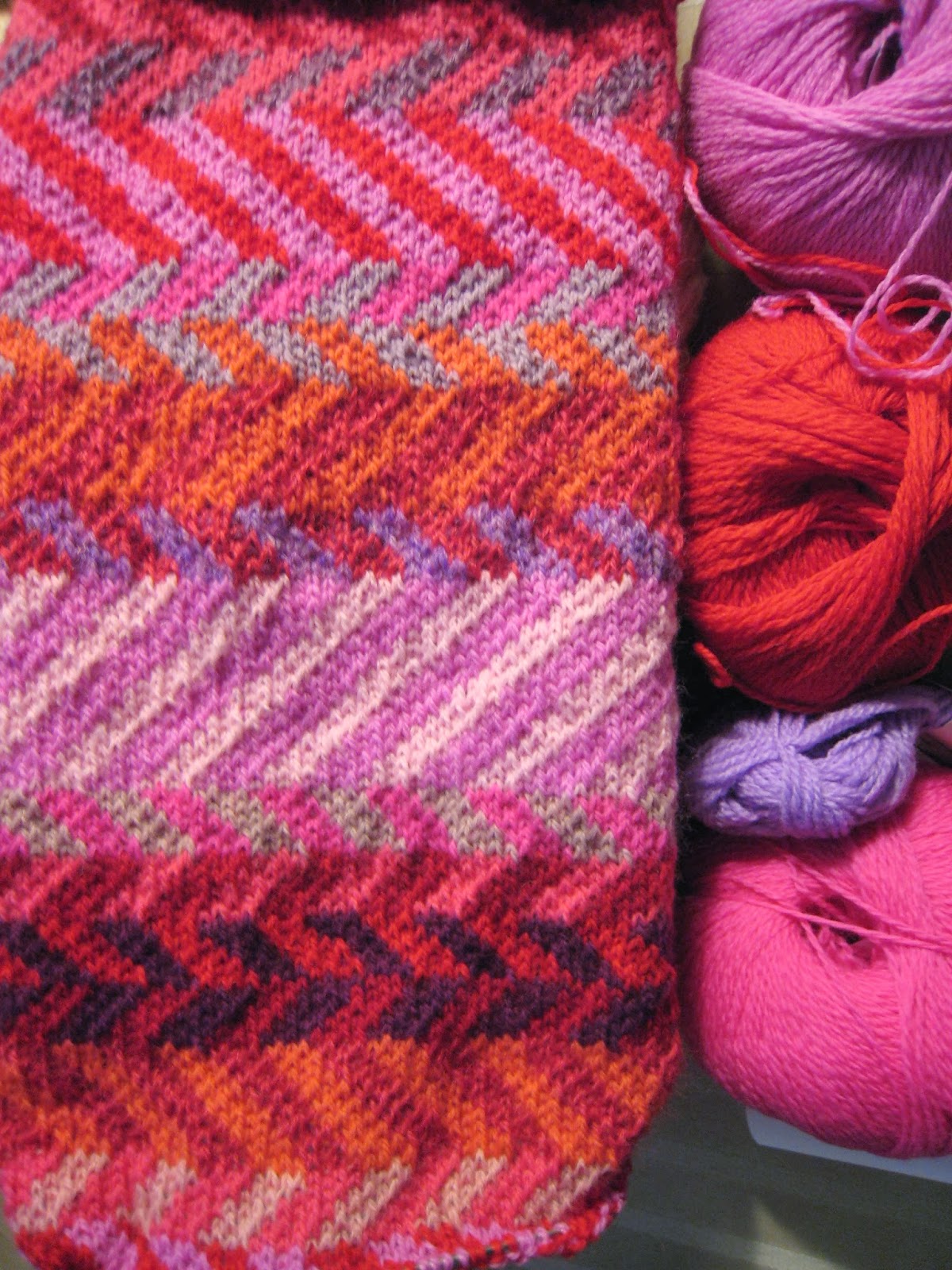 I am also continuing to knit this rosy fair isle scarf on my little circular needle.  It's getting longer and long, and playing with the colors is lots of fun.  I think that I will soon be adding it to my Foakley Arts shop over at Etsy.

Thank you all for your visits and comments.  It has been wonderful to visit your posts, too, and to see that flowers and green leaves are actually beginning to appear in other parts of the world, and that rain has finally graced California.