The calendar tells us that summer will change into autumn in September, but here in New York we are being given all sorts of signs that summer has left the stage.

The weather is cool. I have the apartment windows open, but the fan is in the off position. Again, as in past years, I compliment myself on my continued reluctance to buy and install an air conditioner. Got past another summer!

There are so many other signs outside the borders of the apartment. (Let me say for the record that the awful Painting in the Lobby is there for the duration. I have had a little truth to power session with some folks who I took to have been responsible for the awful Painting's purchase and installation. I let them know that if I were a prospective tenant and saw It, I would no longer be interested in trying to move into this building.)

Now, let me move on to other seasonal signs.

Every summer, a number of concert series are offered free of charge in various venus across the City's five boroughs. I am very lucky to have quick walking access to two sites of much music, Central Park and Lincoln Center. My schedule at the shop has prevented me from sampling a much of these musical feasts as I would have preferred this summer. But still. The feast was there for many folks to enjoy.

This past weekend marked the final concerts Outdoor at Lincoln Center. Lincoln Center is our lovely westside cultural center, featuring an opera house, and two other magnificent concert halls, a theatre and the Julliard School. But in the summer, the plaza surrounding these buildings host a wonderful out of doors, free, series of concerts. This summer, the plaza has been under renovation (just like my apartment building) and so the range of the concerts was lessened. Shrunk.

However, many show did go on. Yesterday was the annual celebration of the Roots of American Music Festival. The aged legend Pete Seeger performed. Early yesterday afternoon, I walked over and took a seat on a folding chair in a somewhat shaded spot to watch a marvelous collection of aged blues performers sing wise old songs in a concert labeled Music Makers Blues Review. If you go to www.musicmakers.org you will see more about an organization that is trying to not let the living sources of great blues music go hungry.

The music was wonderful.

Next on the schedule was the crazy punk/rockabilly/all sorts of stuff band The Knitters, lead by John Doe and Exene Cevernka (formerly married and formerly of the band X.) Again, fabulous music. They take old tunes, tunes they have written, twist them around and blast them right out at you.

Then, since the first two concerts ran long, and it was getting on to my supper time, and I do need to have supper, I left LC to go home to have supper. And then walked back downtown again (about a 10 minute walk) in time to hear the last few songs by the next act, Charlie Hayden and Friends. Country music, traditions mixed with jazz.

By the time that set concluded the sky was deep blue, and a star had appeared overhead. Also overhead we could see, but thank goodness, not hear, the recurrent passovers by planes and copters.

I was so lucky that a kind young man let me know that the seat next to him was available ... tenth row from the stage. The stage hand roadies rushed about trying to reset the equipment for the grand finale.

As I looked around me, I marveled at the variety of folks in the audience, all colors, ages, sizes, some having brought along their dogs, unwilling spouses, backpacks, zimmer frames, opera glasses, cups of beer, cell phones, tattoos (lots of those,) fetching little straw fedoras, picnic suppers, trophy wives, children ... toddlers and older, too. It was just such a rich mix, the sort of gathering that always makes me very glad to endure what I do in order to live here.

Okay, so finally all the twiddling with the amps, and lights, and guitar tuning was perfected.
And...we got to hear a fantastically energetic and affectionate New York neighbor of ours, Patti Smith just sing all those wild and crazy and wise tunes of hers. And her band still has Lenny Kaye on guitar. And now even has added her son Jackson Smith. We had a love fest ... audience and performer. Seated near me was a very enthusiastic sari-wearing Indian lady who knew all the tunes and could dance to them. She continued to offer translations to her husband.

The music went on until at ultimate encore time, Patti said that there were only 4 minutes left (union electricians, etc.) and so ... she and the band would just deliver the most that they could manage in four minutes. And they did.

What a lovely way to close out a summer season. Interestingly, both Patti and the Knitters repeatedly urged the audience to remember to vote, and to get our friends and family to vote.

As I write this tonight, I have the television on in the next room, with coverage of opening night of the Democrat Party's convention. Not long from now our country will again been going to the polls. I have voted so many times in my life, but still get a little kick of enthusiasm from singing along with Patti ... people got the power.

Pleasant dreams to you all.
Posted by Frances at 5:51 PM 20 comments:

As we approach the night of the full moon, how I wish that I could tell you that the vile painting has been removed from the lobby of the building in which I live. I cannot. It is still there, and has continued to collect many comments from folk who pass by it. So far, I have not heard anything favorable.

I so appreciate all the comments on my prior post! You all give me evidence that there are others in this year 2008 who also live in circumstances not within their control. Well ... if we want to go very global, do any of us live in a place that we control? Should that awful lobby painting take on symbolic status? Nah. It's just ugly.

The elevator repair continues. We have intermittent contact with the remaining two elevators for our travels upward and downward. I am so glad to be within foot climbing reach of each destination. The stairs may be strewn with debris from the renovation, but they still work!

The failing little topiary fir tree outside the building entrance has been replaced. It and its stronger, older topiary brother tree have now been also surrounded by additional plantings. I may yet have the courage to get the camera out to show you how real estate folks can even mess up plantings, but not tonight.

I know that the weather across the Atlantic has been grim. I remember that the only time that I ever traveled to London in August was the coldest trip I ever experienced. I wore all my packed layers simultaneously. I remember stopping by the South Molton St. Sassoon shop (part of my usual stops) for a very extreme hair cut, wearing all my layers, and having the top stylist exclaim how he really liked my "gear." I was so glad to be warm!

I have again retreated into to yesteryear.

Back to now. Work has been stressful. The rains we have had in the past weeks have caused leaks in the "back stage" parts of the shop. I report these problems, hoping that those who can fix it will fix it. Not yet. It is raining right now. Wonder what I will find tomorrow morning.

Have also been dealing with a variety of "human resources" issues. I may never go into greater details here, but will confess that it is so very tiring to do the very best job I can imagine being able to do, and still find that there are still issues outstanding.

Earlier this week, I so enjoyed being able to get together with old NYC friends who were making their more or less annual visit back east from their home in California. It is wonderful to just get back into conversation with folks that you know so well.

Is that not a beauty of this site. That we can trade our written conversations, day by day, and every bit of it just continues to strengthen the interests we share with each other. 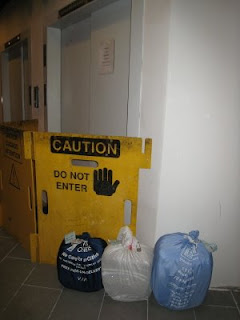 I have so enjoyed reading about the beautiful countrified summers being experienced by so many of you. I read of garden teas, gorgeous flowers (proved by splendid photos,) visits t0 pubs, visits to other beautiful places.

And then, I realize that I should share some of my current city views with you.

Perhaps you will recall that my apartment building was fairly recently sold to a corporation. I am lucky to be a protected tenant, so am entitled to remain in my tiny flat, as I watch other, more vulnerable tenants packing up and moving out.

As their apartments are vacated, they are renovated. Dishwashers, sanding of floors, painting of walls, and perhaps a few more improvements yield rents double what we vets are paying.

The public spaces are also being "improved." Out on the sidewalk entrance to the building, we have two large concrete planters in which have been installed mini fir trees. One of the trees is already not looking very healthy. At the base of each of these minis are some weakening begonias and lengthening vines of some sort. The curbside cherry and ginkgo trees out front have had periwinkles planted at their bases. The periwinkles don't look much better than the begonia. (In past summers, we had impatiens (busy lizzies) where the periwinkles struggle, and the impatiens were toughies who blossomed.

Our hallways are being smoothed; the prior prickly stucco finish is being banished. One of our three elevators is now out of its vertical tunnel. It will be replaced by a better, modern vehicle. Meanwhile, we can count on the stairs to see us through, when the two remaining elevators just don't show up at their requested station. 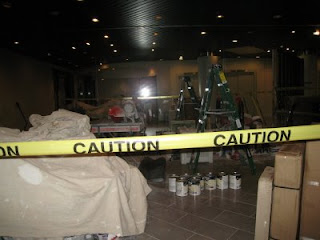 But. The worst is the lobby. The flooring has been re tiled with slippery, slightly metallic tiling.

The old lobby decor was not pretty, but did not try to be flash; it did not aspire to any sort of beauty. It was content to be functional. 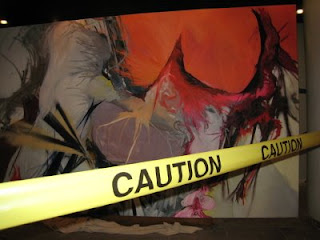 Today a very large, very awful abstract painting was added to the lobby mix. I regret that I will have to see this every time I enter or leave this building. I feel very sorry for the doormen who sit at their post a few yards away from this monstrosity, hour after hour.

The painting could not have been created by a painter. I asked if it was a temporary measure, but was assured that it will be a permanent fixture.

Do you all see why I rely on my country dreams?