Our city has now added another weather-related name to its collective memory. Hurricane Irene. Like many other hurricanes, she was raised in the Atlantic Ocean and spent her early days in the Caribbean. She grew very large and powerful and settled in on an usual northern path, hugging the Atlantic coast of the United States.

Irene moved at a slow pace, and attracted lots and lots of attention from the press. Governmental officials also began to take notice of her power, and began to plan how best to protect local citizens (many of whom are also voters) from Irene's potentially destructive ways.

By last Friday, our New York City Mayor along with other regional officials made the decision to actually close the area's mass public transportation system for at least two days, beginning at 12 noon on Saturday. No buses, no subway trains, no commuter railway trains, etc. This was a huge hint to everyone to get to a safe location before midday Saturday and to stay there. Our Mayor is also a billionaire businessman and clearly understood the economic ripples to be caused by this transportation decision.

Most folks therefore received a change to their weekend plans. I was to have worked on Saturday and Sunday, and instead received an opportunity to relax at home, chat with friends on the phone, work on various craft projects, do some reading, and watch hours of television coverage of the hurricane vigil.

The size of the storm meant that we were already receiving wind and rain here in New York while Irene's actual eye was still slowly moving across the North Carolina coast, hundreds of miles away.

That eye was to reach us around midnight. I admit to finding the land of nod well before midnight and actually sleeping through Irene's entire visit.

When I woke up this morning, I did not hear any rain. (Heavy rain and wind had been predicted to last through this afternoon.) I looked out my window and realized that Irene had sort of lost her punch before she got here. There is a popular tune with the lyric, "if you can make it there, you can make it anywhere...." I am truly not at all sorry that Irene did not cause as much havoc as some had predicted.

Most damage is flood related and occurred in outer areas of the city. Some huge trees have fallen over as their root systems could not hold in the soggy, soggy soil. (I dread seeing what has happened over in Central Park, but it's too dangerous to take a walk over there this afternoon. Branches and trees are still vulnerable.)

By late morning, Irene was downgraded to a tropical storm as she headed through Connecticut on her way to the New England area.

By early afternoon, I was suffering from cabin fever, and decided to take a little walk around the neighborhood. I took my camera along, so that I might show you all some sample city views.

Because of the transit shutdown, many businesses wisely closed, including my usually bustling local market, The Fairway. This store is very, very rarely closed. 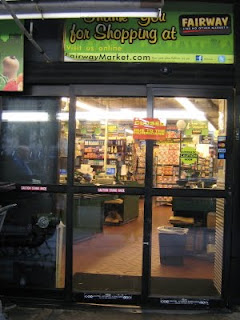 The sidewalk outside Fairway is much duller without the usual brilliant display of multi-colored seasonal produce. Those fruits and veg will be back tomorrow. 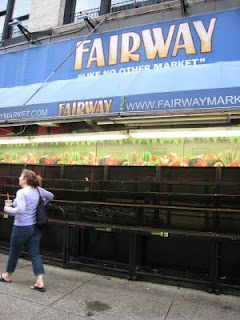 Also along Broadway, the usual sidewalk book vendors had carefully wrapped up their tables of books and records and magazines. I do hope that they used enough plastic. 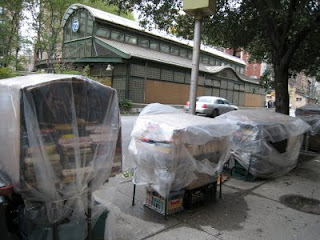 Although the Mayor said that using masking tape on windows really does not do much to protect those windows from airborne debris, some folks did decide to tape their windows. 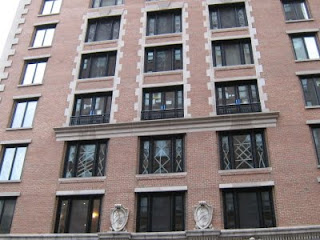 My final photo is a southward view that shows the post-storm cloudy grey sky and includes one of the entrances to the 72nd Street subway station, with a police car parked outside. Before the subway trains can be put back into service, many safety checks must be completed, including the need for transit personnel to actually walk along each of the hundreds of miles of subway tracks. Wow. 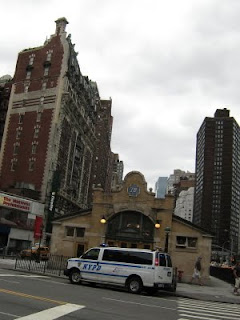 As I type this post, I have just heard that limited City bus service has already been reinstated. Wow, again. I think that means that I will have a way to return to work tomorrow.


I would like to thank all you readers who send your good wishes to me over the past few days. What kind folks you are.

As we enter the last weeks before Labor day, our tradition last day of summer, New York has been having lots and lots of dramatic thunderstorms. These storms are usually proceeded by a beautiful day, and then a strong wind blows a new weather front in from the west that brings the thunder, lightning and lots of drenching rain.

One of these storms arrived Friday night just as I was about to leave work. The sky grew very dark...it was not yet sundown time. And then, the big show began. I delayed my departure for the subway train station for a while, hoping that the storm would quickly roll over the city.

The storm, however, had other plans, so I got my little folding umbrella out and took my chances splashing my way along very wet sidewalks, uneven cobblestone streets and tried to avoid deep puddles and other folks' umbrellas. It was Friday night and lots of evening plans were rapidly being altered.

My usual commute requires me to transfer between subway lines at the Times Square station. Last Friday night my usual plan required amendment, because some train lines were out of operation. When water gets on to some electrical tracks, it is too dangerous for the trains to proceed. So I along with thousands of other damp travelers found other routes to get to our desired destinations. We all just slogged along, and nobody seemed to be complaining very loudly. After all, nature is much more powerful than we are!

Today has been a beautiful day, and although we are under a thunderstorm watch, the local sidewalk vendors are having more luck with their stylish hats than their stocks of umbrellas. 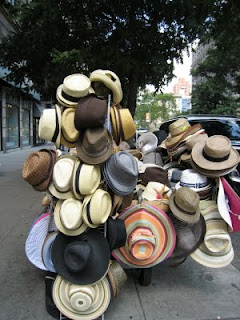 The church in the next picture is the First Baptist Church, but its architecture is inspired by that of other countries. There is no bell in its little bell turret. 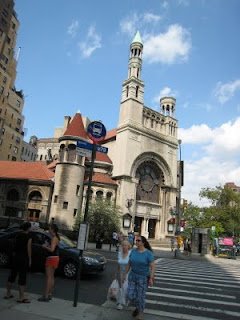 I was also lucky to have a day off yesterday, and did some more sewing machine research, culminating in my ordering a new machine, which I should receive later on this week. I am looking forward to trying out its features that will greatly surpass those of my trusty old Singer.

Meanwhile, I have been doing a bit of playing with color while crocheting and knitting. The following photo shows the current sock project. 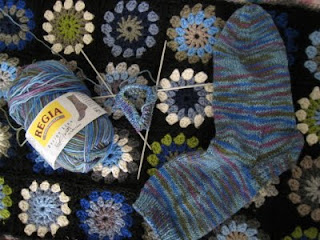 When I have two consecutive days off, I also have the opportunity to get caught up with tidying up the apartment and doing some cooking. Although I have not precisely followed any of its recipes, I have been inspired by thumbing through the following Elizabeth David collection that I found deep in the stacks of the New York Society Library. 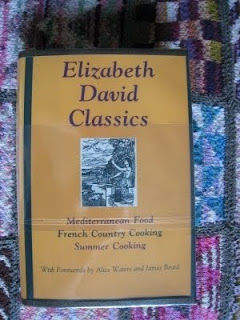 It is back to work for me tomorrow morning. I am hoping that the sun will shine and the commute will be drama free.

I thank you all for your comments, and advice on many matters. I have recently been having pretty good luck negotiating blogger by employing Chrome.

Good evening from a hot and humid night in New York. A sustained, overdue rain did fall upon our fair city this afternoon, but has left us not very cooled, but very moist.

I do not know if other of my blog pals have been encountering problems with accessing your posts, or dashboards, or other bits and pieces that allow all of us to keep up our international, airborne connections. Well. I have had such problems for the past few days and am getting annoyed. Why no patience with this recent hiccup? Easy answer, because I do so enjoy staying in touch with you all.

I hope that our New York weather will soon turn milder, and that google, blogger or whatever power is experiencing difficulties, will soon have a complete recovery.

Hey, I also would not mind of the stock market might find a way to send its arrows upwards.

Best wishes to you all. All over the world.