Many years ago, I lived downtown in a neighborhood that became known as SoHo, an abbreviation of South of Houston Street.  At that time it was not really a residential neighborhood.  Most of us who lived there were artists who had commercial leases with the quiet collaboration of our landlords, who were happy to fill large, primitive, spaces in their buildings formerly used by light industrial businesses.  Many of these businesses were textile-related.

The picture below shows a current view of where I once lived.  The building is now painted off white.  It was not painted when I lived there on the fourth floor (third floor to some readers.)  I think the fire escape was a rusty green. 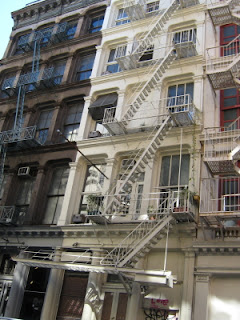 I reluctantly left my loft in the early 1980's because I could no longer afford to live there, and  had not had an official lease for some time.  By the time I left, the term Loft had attained glamour and SoHo was awash with galleries, restaurants and small unique shops.

Since then, the neighborhood's galleries and most artists have moved on.  Big commercial interests (Chanel, Prada, Tiffany, etc.) have arrived.  The primitive old lofts have been vastly  improved and house millionaires.  Tourists still seem intrigued by quaintness we old timers no longer see.

I now work in a SoHo shop, and had an interesting experience last Sunday.  An older gentleman entered the shop and, as is our way, we greeted him and his companion, and let it be known we were there to assist.

The gentleman and his companion walked around for a while and then seemed ready to depart, and so I inquired if I could help him find what he was looking for.  He smiled and replied no, because it wasn't there anymore.  This intrigued me and so I said that we often here that phrase...what was it that he sought?

And so, he told me.  Years ago, he'd made a movie in the neighborhood and was trying to find the location he'd used.  He said the film was An Unmarried Woman.  Well!  Of course, I remembered the film very well, and was able to tell this gentleman that the film was made on Greene Street where I had lived.  This gentleman was Paul Mazursky, the writer and director of that wonderful movie.  It was such a pleasure to meet him, and to be able to direct him to the street where I'd lived.

If any of you have seen the film, perhaps you will remember that last scene of the unmarried woman trying to carry a very large canvas down a street?  If you've not seen the film, I would recommend it!

Now, I will wrench myself from nostalgic indulgence and show you what's happening in Central Park these autumn days.

By the Lake, there are some late flowering plants and shrubs, and the weather is still warm enough for rowboats and ducks to share the water. 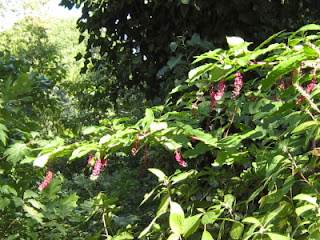 Alas, the next photo is not clear enough to provide evidence of two fast-moving little hummingbirds who were feasting yesterday afternoon.  I do not believe that I had ever before seen a hummingbird! 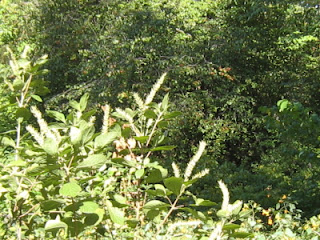 I continued my walk by the lake, and somehow did not take lake photos.  Instead, I will treat you to some of the decorative sculptures along the grand staircase that leads to the Bethesda Fountain area. 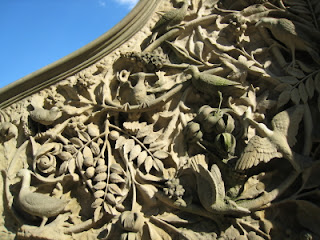 You can see how intricate these nature inspired sculptural friezes are. 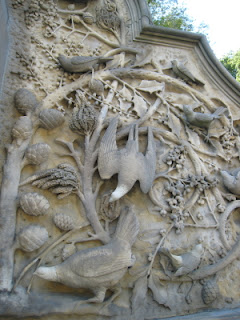 I think that they are quite beautiful. 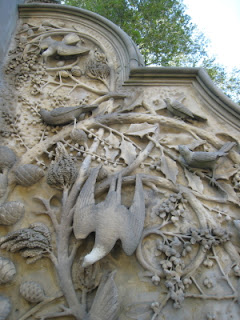 Heading just a bit south of the Bethesda area, I came upon the old Band Shell plaza area, that has many benches and quite a few large, decorative planters.  Pleased do not be fooled by the  next photo.  That gorgeous leafy tree is not, repeat not, growing from the planter. 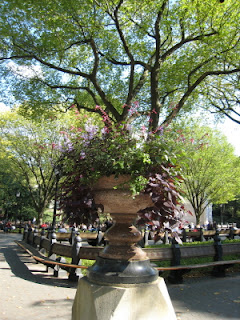 As you look at the next picture, imagine that you can hear the bossa nova saxophone music played by the gentleman  just to the right of the lamp post on the left.  You can also imagine having ice cream or a hot dog or other snacks purchased from the vendors to the right. 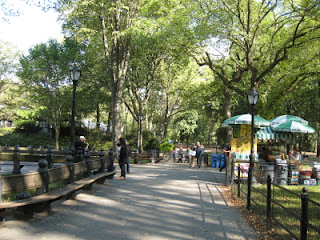 Here is a reminder that Central Park really is in the middle of  Manhattan. 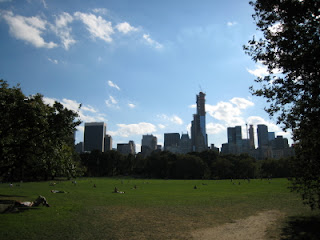 It's always interesting to see what improvements are underway around the Park.  Although I saw no workers yesterday, someone has definitely been doing a fine job in making an attractive amendment to an existing pathway 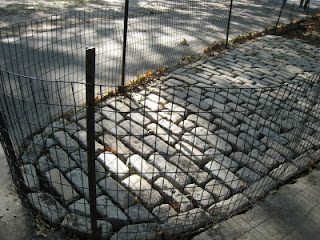 The project is not yet complete. 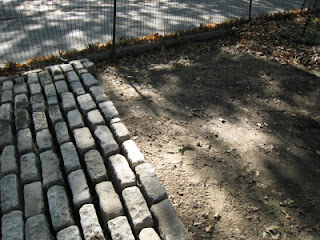 These stones look very heavy.  Would any of you all like to volunteer to finish the project? 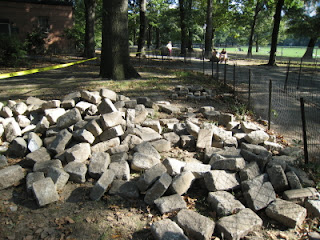 As always, there are quiet places in crowded New York, where a couple might enjoy a sweet romantic moment.  This boulder makes a sweet spot. 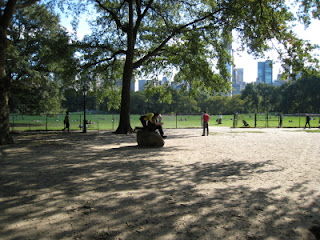 The shadows were beginning to grow, as they do earlier each afternoon, and so I began walking home.  I passed by another little grove featuring a wonderful mix of plants.  I do not know what this pale pink berry might be. 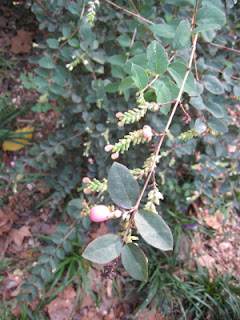 I thought it interesting that now that summer has departed, we again get a glimpse of golden yellow flowers.  It does not seem so long ago that the daffodils charmed us with their colors. 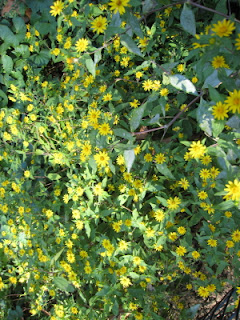 I hope that you all are also enjoying these late September days.  They have much to offer!
Posted by Frances at 8:52 AM 32 comments:

It's now quite early on Saturday, and I am nearing the end of a very enjoyable week of vacation days.  Thank you all very much for all the birthday wishes.  You have helped me launch this newest year in my life in very good company. 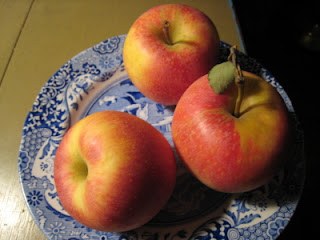 Let us now move on to the results of the give away.

This is how I determined who would soon be wearing the crocheted blue beret.  The names of all the folks who commented on the previous post were written on these little slips of paper. 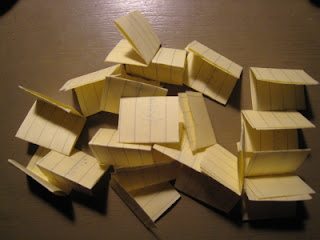 These slips of paper were folded up and tossed into a brightly colored paper bag.  That bag was shaken around quite a few times. 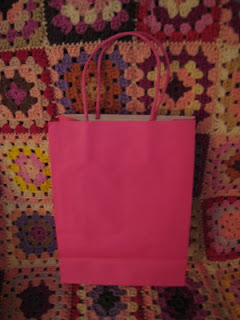 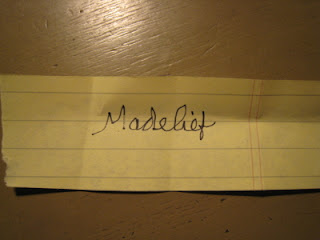 Madelief, I would ask you to send me your mailing address via e-mail, and also please send me a measurement of your head that will ensure that the beret will be a comfortable fit.  This hat will be a couture one off design!

It is with some reluctance that I now begin to confront the reality of tomorrow's return to the workplace.  I will also be contemplating when I might be able to have another week to myself.  I hope that you all will forgive me this greediness!

Thank you all for your visits and comments.

It is a beautiful clear day with low humidity, very similar weather to that on another September 11 morning some years ago.

I paused a bit after typing that sentence.  Perhaps some of you might also pause a bit after reading it.

I'll now move on.  September 12 is my birthday.  This is, according to the Blogger counter, my 200th post.  I thought it might be nice to mark these dual milestones by offering  something to you kind folks who've visited here over the years.

This will be my first give away.  I have crocheted a hat just for this occasion. 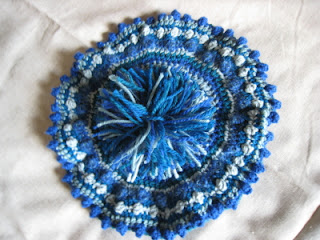 The hat is a sort of exaggerated beret style, and is about 11 inches at this widest diameter.  I used a selection of blue or blue/green colors and most of the yarns are DK weight wool, with the exception of some soft Debbie Bliss Cashmerino and some wispy Rowan Kidsilk. 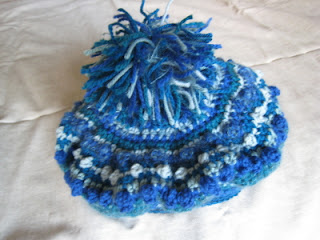 I've taken several photos so that you will be able to get some idea of what the hat is like. 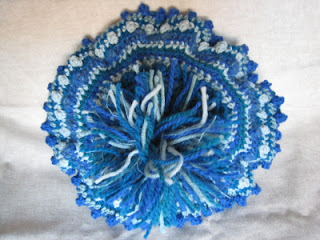 The following photo shows the deep edging band that allows the hat to stay on one's head.  I also included some of the contributing yarns in this photo so you can see more of what the shades are like. 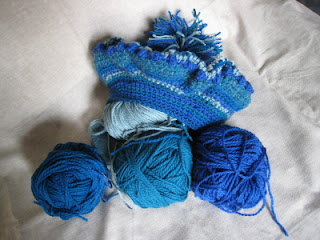 I made the hat yesterday during that marathon tennis match between victorious Andy and previously victorious Novak.  My television is in failing health, and so I followed the US Open finals via the US Tennis Association's web site.  The picture was jumpy, but it still gave me some sense of what those two excellent players went through on a very, very windy and then chilly afternoon and evening.

Oh, back to the give away.  If you would like a chance to have this hat warming your noggin this winter, please do leave me a comment by Friday, September 14.  I will draw a winner's name on September 15.

Meanwhile, I will now return to yet another lace knitting project. 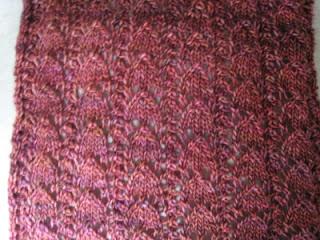 So far I am truly enjoying having an entire week off from the shop.  It's grand to make up each day as I please.

Once again, many thanks to you all for your visits.
Posted by Frances at 12:28 PM 26 comments: