It's snowing lightly tonight, continuing to build a gentle covering that began this afternoon. There is something very strange about trying to sell folks beautiful early spring clothes in this sort of weather. In theory, we are selling the resort collection in the shop. In the current financial atmosphere, I don't how many folks are able to waft off to a warm resort.

I was glad to have my warm, down-filled coat, cashmere-lined gloves and snug woolen beret when I left the shop to walk over to the subway station to go home, an hour after sundown. As I walked past the lovely architectural iconic Flatiron Building, I could not help but look up and see the Empire State Building and the superbly art deco Chrysler Building shining brightly through their veil of snow. Magic. It is these sorts of sights that make me so happy to live in this city. Millions have seen these same sights through many decades, and enjoyed them just as much as I did tonight.

We know that spring will arrive within a few months, and my little antique china plates and saucers show images inspired by long ago springs. English springs, not New York springs, but it is the same sun, after all. 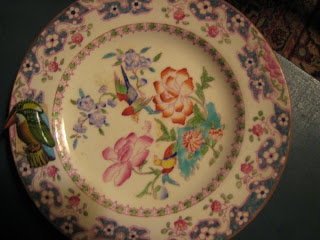 This Minton plate is so pretty, and I have had the nerve to let a cheap tin green bird rest on its shoulder. 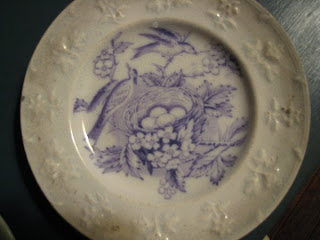 This plate is very old, not sure quite how old. I show it, remembering the lady from whom I bought it in the Portobello market years ago. She was a retired teacher who loved old china even more than I, and certainly was more knowledgeable than I will ever be.

Whenever I would visit London, I would make a point of checking in with her and catching up with a long chat. We would always exchange Christmas cards and letters. Sadly, she died before last Christmas, and it makes me quite sad knowing that we won't again have any of those catch ups. She was someone whom I initially met by pure chance, yet got to know well over the years. I have always treasured the opportunities that life tosses us every day. 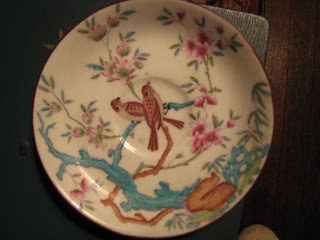 Here is another odd little spring like Minton motif on an odd saucer. The colors are so lovely. I do not have the cup, never saw it.
Let me now return to that wintry New York subway system, where many commuters, who would otherwise never meet each other, mingle every day.
Yesterday, on an errand trip downtown, I stepped into a train car, and then saw two men enter, carrying two folding chairs and three large drums. My spirit rose immediately. I had not seen these fellows in months. They are amazing musicians and full of joy that they easily spread to all who hear them play.
We exchanged smiles, they quickly unfolded their chairs and sat, one man began an easy beat on his drum to start their conversation. Then the other man began to charm intricate rhythms from his two drums. All the fellow travelers watched, smiled, some did a little dance to the beat, as the train rushed along to its next stop.
The musicians knew just how to time their performance, ending it just before the train made its final brake, when the passengers for that stop needed to make their moves toward the doors. I said Happy New Year, and great to see you, to these gents, and they returned the greetings, also having recognized me. As they passed their caps around for any money that their audience might offer, they made a point of saying that they really did play for joy! Joy that they give and joy that they receive. I am very sure that they also play "real" gigs and that this subway bit is just a way to have some fun, try some new routines.
Just like glimpsing those architectural beauties in tonight's snowfall, hearing that duo play yesterday and seeing how their music created a three-minute community proves to me how wonderful this city can be. Yes, it can be a harsh place, and crime and tragedies abound, but as this year gets off to its beginning, how I appreciate being reminded of its splendor and unpredictable fun.
Sweet dreams to all.
Posted by Frances at 5:51 PM 24 comments: 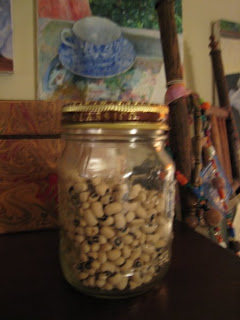 What is this that I show you in the above picture? It is a jar of dried legumes, that we from the southern part of the United States know as black eyed peas. These are to be eaten on each New Year's Day to ensure luck for the twelve months to follow.

Year after year, I have slow cooked these peas/beans, and either added them to the traditional hopping john dish, involving rice,onions, canned tomatoes, and ham, bacon or some sort of pork. Other years, I have taken these peas and taken them to another global cuisine, involving cumin, turmeric, coriander, garlic and many other interlopers. The basic black eyed pea is very bland and makes an easy base to which many sorts of other seasonings and vegetables might be added.

In my personal history, the jury is out on whether eating these peas does ensure good luck. Yes, I have some very good years, and others that were rather mixed. Luck? Peas? Not sure. I think that the tradition might have its origins in a cure for New Year's Eve hangovers.

Well. This year I worked on New Year's Eve, and we were lucky to be able to close the shop a few hours earlier than the usual hour. I made my way home via the subway train, transferring as usual at the "crossroads of the world" Times Square station, and along the way mingling with lots of other folks just wanting to get home, together with many folks anticipating the revelry just four hours away outdoors, in sub-freezing temperatures and strong winds in Times Square, above ground. I saw some young ladies in bare-legs and mini skirts and praised their courage. I saw some young men who thought a layer of a logo'd sweatshirt would keep them from freezing and praised their courage, and blessed them their youth.

I got home, fixed dinner, called some friends, and turned out my apartment lights well before midnight. The sound of the fireworks from a midnight mini-marathon run in nearby Central Park woke me round midnight, and I thought sweet new year's thoughts. In the next hours, I heard many celebrators on the sidewalks below my bedroom window returning from their festivities.

Around 2 am, I knew I was ill. Probably something that I had eaten. I have an idea of the Prime Suspect, but no proof. After that, I was up about every hour until around dawn.

New Year's Day arrived, and I returned to the land of the living. This year, however, I did not cook the black eyed peas. I did not reach out for the traditional gift of good luck that such a meal would bestow. No. I could not bear the thought of eating them .

I broke my overnight into morning fast early on the afternoon of Jan. 1 with a restoring cup of tea and a buttered English muffin (a sort of American version of a crumpet.) This was delicious and after that feast, I was truly ready to welcome the marvelous opportunities that 2009 might just offer us.

Best wishes to all for the New Year.