Let's see, it was about a week ago on a sunny, but still chilly day, that I took a walk across Central Park. It was a day that did not require gloves, and so I was able to take a few photographs. I planned to write one of these posts later that day.

I did not get around to writing on that day or on any of the days in the following week. This New Year finds me dawdling a lot when I am not at the shop. At the shop, dawdling is impossible.

Allow me to share some of the pictures I took on that blue-skied day. These red berries managed to cling to these branches during our recent snow storm, and subsequent windy rain storms. These are tough berries! 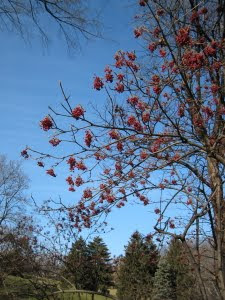 The above picture was taken as I walked along the edge of what is known to many as dog hill. It has always been a very popular spot for lots and lots of dogs to frolic around. Years ago, they got to be leash free in their frolicking; this is no longer so, except for some renegades who like a taste of freedom.

The picture below shows some row boats stacked against the edge of the frozen lake. Around April the boats will be available to rent by the hour. 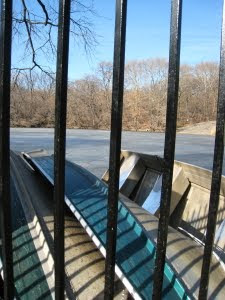 Here is another westward view across the frozen lake. The towers in the background are atop an elegant apartment building on Central Park West, the road that, logically, is on the western edge of Central Park. 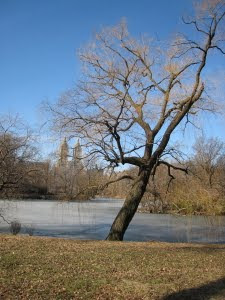 I did get lots of exercise that day, and took more pictures. Many are similar to others I have previously shown you all.
Because it has been so very busy at the shop, with semi-annual inventory, various sales, meetings, and much more going on, it has been a pleasure to seek another sense of time by continuing with the various knit and crochet projects that I began just after Christmas.
I finally finished the hat and mitts set. The hat is crocheted from a mixture of wool dk, tweedy wood dk, and a silk mohair. The view below gives an idea of the textures and pointy dome top of the hat. 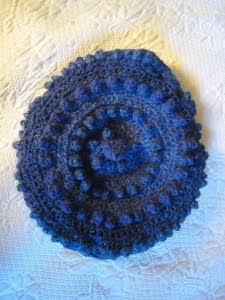 The photo below gives you an idea of what it looks like on my head. 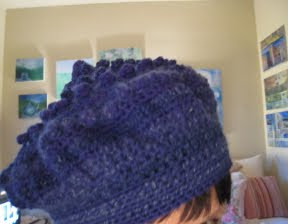 The mitts were knit with the same wool dk and tweedy wool dk. I decided to leave the silk mohair out of the mix! In the background you can see yet another section of my fair isle patchwork coverlet. 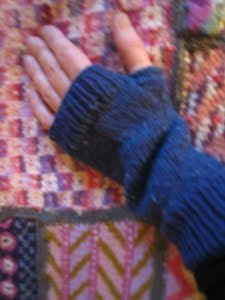 And, here's the newest project, my second pair of socks. I am using a Crofter dk yarn, and wonder if I really like that gauge for socks, as well as I did the four-ply merino I used for my first pair of socks. Guess I will know more when I finish. 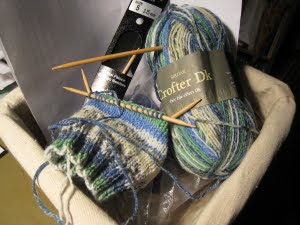 I have finished knitting another project, a pair of "house" slippers, done with double strands of harmonizing dk. Now I am in the process of felting them up a bit. If I ever get the result I am after, I might just take another photo.
This is a very quiet post. Perhaps as you read my words, you will share the relaxation that I have found in working on these projects.
Although the days are definitely gradually growing longer, the sun has now set, so I will now wish each of you all a good evening from New York.

Good evening from New York on New Year's Day, 2010. Or should that be New Year's Night? I have no idea, but am glad to be putting up some new calendars proclaiming that we do now have a fresh selection of days and opportunities to make our own history. 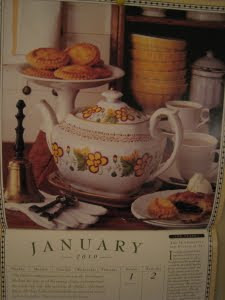 The calendar pictured above features vintage and actual antique tea pots and other china. I love its images, and how they conjure up an environment of calm, quiet, continuity of civilization. All as the tea slowly brews, yet does not stew.

The calendar pictured below features fanciful decoupage combinations of images, many with a bit of a Victorian age theme. To start off the year with dancing pigs seems a very brave choice. I did laugh to see this page. 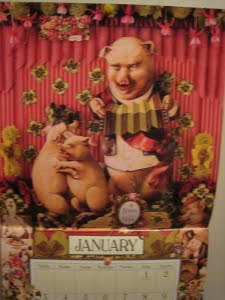 I worked yesterday, and was glad that the company authorized our closing the shop's door as of 5 pm. By then the morning's snow had evolved through dim sunlight, into an evening mist, that promised to develop into rain.

The Empire State Building was still glowing red and green. I apologize for not having taken a photo. It was too cold to get the camera out while taking my gloves off. Next year, perhaps. As I rode the subway train home, and transferred to a west side line at Times Square, it was obvious that all sorts of security measures were being deployed. What a night to be a New York police officer.

It was good to get home and have some supper. And then, what a shock to have some sad news about someone dying far too young.

I decided to turn my lights out well before midnight. I knew that at Midnight the Central Park fireworks would be loud and insistent enough to wake me. The first moments of this new year would surely be available. Yes, the fireworks were right on time. Revelers on the sidewalk below my bedroom window were quite amusing as they attempted to remember the lyrics that followed "Should old acquaintance...." It all sounded rather sweet. Sweet is an adjective that some would not associate with sidewalk revelers.

Resisting the temptation to switch on the television to see the scene at Times Square, I just listened to the sounds of that particular New York night. And soon enough, I drifted off into an undisturbed sleep.

This morning the sky was gray, and the air seemed damp. I had made two resolutions. One was to make a very small portion of black eyed peas, the traditional Southern USA good luck dish. The pictured jar contains the remaining dried peas left from a supply bought before New Year's 2006. A small portion of dried black eyed peas goes a long way. I now have some left in the jar to grant me lots of luck for 2011.

My black eyed peas were slowly simmered with a carrot, shallot, some ham and a mix of herbs. I added some of the cooked legumes to tonight's pasta. Delicious. I really feel lucky now! 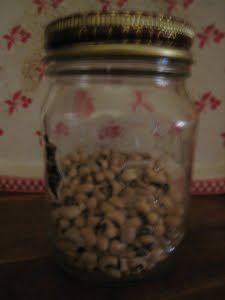 My other resolution was to try to get rid of my chronic cough that has clung to my throat on and off for over two years now. I have been checked out by my gp, and by a specialist, and have taken some medicines, and have had some chest x rays. The cough eases for a month or so, and then seems to get its power back.

I think that this condition is also giving me a much more regularly raspy voice than I have ever before had. I have never smoked cigarettes. I sound as if I were a smoker. My thought is that working at the shop with its dry air, and its requirement that I talk quite a bit are what keep my raspy. And so, today I started on my resolution. I did not speak, I drank lots and lots of liquids, and ... this evening, there is an improvement.

Back to to work tomorrow ... so I may have a back slide.

So, on this grey day, I did lots of cleaning up around the apartment. Clutter be gone. Dust, you've got to go, too. Old paper records, you are getting sorted. All those projects seem so appropriate for New Year's Day.

I also did some work on several textile projects, fingerless mitt experiments that I am playing with. The first picture is a simple pattern, without any special stitches. I am using two Rowan yarns, one is a basic DK merino wool, and the other is a Rowan tweedy yarn that is very close in harmony to the merino. I am also experimenting with new bamboo double point needles.

This is a design that I can work on without paying much attention. Can read and knit at the same time. 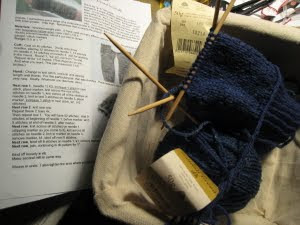 This next pair of mitts will have actual fingers, with the tops off. I am using up a mixture of four ply yarns, some merino, some Shetland wool. The pattern I am roughly following is in an old book of Susan Duckworth designs. I have made many sweaters from this book, and previously made a pair of true gloves from this same pattern. Since taking this photo, I have finished the thumbs, and now am on the last lap ... only eight fingers to go. 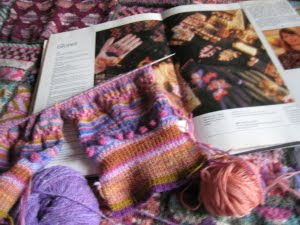 It is so relaxing to be at home, relaxed, playing with colors and textures, listening to good music on the radio, trading e-mails with friends all over the world.
Not coughing!
This year is off to a good start. I send the best New Year's wishes to each of you. Let's have a grand 2010.
Posted by Frances at 4:15 PM 40 comments: