Good evening from New York.
I have read lots of blogs today that brought to my screen all the beauty of spring's arrival in various countrysides. I was awake, yet felt that I was also dreaming.
New York reality today has showed me ... and anyone else around this city on a prematurely summer day. It was 90 degrees. If I were less lazy, I would do the centigrade conversion, but the heat has made me lazy.
Often our city will suddenly embrace this sort of sun-fueled heat at the end of May. To have it happen in late April is a surprise. I dug out my favorite 2008 sandals, and got the laundry done early, got the other required errands done early.
I live in a building built before World War II, and therefore, in city real-estate speak, deemed pre-war. This might amuse some of you all who live in older countries. The walls of this pre-war building are thick enough to keep its inhabitants cool for long after the outside gets hot. Even tonight it is quite comfy in this apartment, and only one window is open.
But I do get ahead of myself. In the early afternoon, I set off on a bus for the east side of Central Park, planning to walk back home after my visit to the library. Just before I boarded the bus, at the end of a long queue, I heard the bus driver in a typically loudish, or even loutish, conversation with another boarding passenger. Seemed that there might be a change of route. The man in front of me did not want any delay in his eastward trip.
I knew that there was a March of Dimes Walk fund raiser around town today, because I'd sent my usual check to a dear friend who's walked this walk for decades, but somehow I had forgotten that there was also a parade on Fifth Avenue, honoring Greece.
I got on the bus. We began our journey. Just as we got to Central Park West (obviously the western boundary of the glorious Park) the driver announced that we would indeed be taking a detour. Bit of tension moved its way backward from the driver's frontal location through the bendy-bus. I just relaxed, knowing that at the worst, I would see more of the Park from the bus window than I would see on the normal route.
The detour took a very long time. We did get to the east side, and I got off the bus around Park Avenue, so that I could capture some photos of the tulips in their final act of blooming. There are blocks and blocks planted with these tulips and these flowering trees. With today's heat, these Park Avenue beauties will not have many more days of glory. 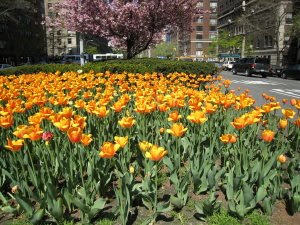 Block after block has this planted area dividing the uptown and downtown traffic routes. 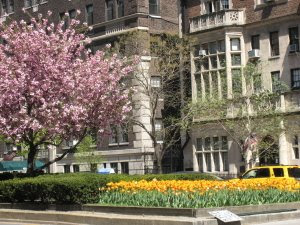 I have taken these pictures following a special request from a lady who remembers the Park Avenue tulips, even as she now shows us so many beautiful views of Vienna.

Ah, finally off the bus, and over to the library for a great hunt in the stacks, and discovery of a book that would otherwise have been lost. It had not been checked out for years. The book is The Stone Book, by Alan Garner.

Got the book checked out, and decided to brave the mid-afternoon heat for a walk through the Greek parade and back across the Park. Great decision!

There was a slight breeze, and I remembered to visit what was still abloom in the Lilac Walk. Most of the many varieties of lilacs along this little pathway just south of the Sheep Meadow have already gotten past the bloom stage are are leafy green. All the same, those still in flower are also giving all who pass by their delightful fragrance. 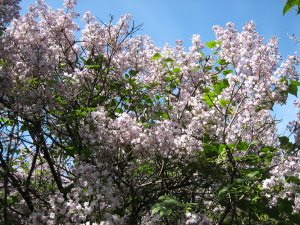 As I began to really feel the warmth of this sunny afternoon, I glanced over at the crowds that had chosen to gather all over the Sheep Meadow. A few weeks ago, this area was still fenced off, not available to the sun worshipping public. The gates are now open. 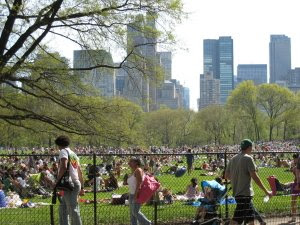 Would any of you all really want to be one of hundreds of people on this lawn? Or would you prefer to be on a country lane, or dealing with various needs of your garden, or watching cricket (or even playing cricket?) Do you perhaps see where my dreams arise?

I wish you all pleasant dreams.